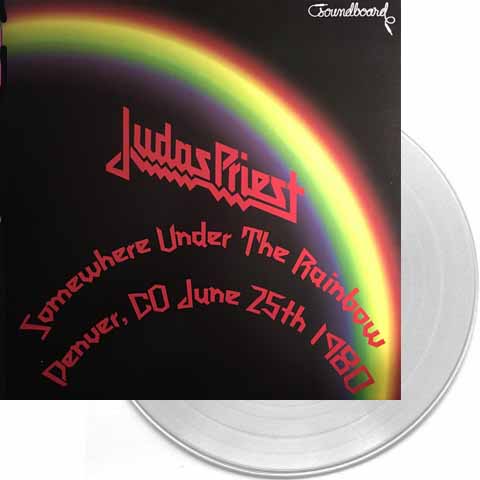 For me, Judas Priest’s songwriting and evolution as a Heavy Metal band peaked with the release of British Steel in 1980. This album from Denver the 25th of June 25 1980 is a true metal feast for the ears. The recording begins with the metal clambering as heard on British Steel as a prelude for Metal Gods, but the band take the stage with the blistering Hell Bent For Leather, there are a couple of uneven vocal lines where Rob hits the highs towards the end of the song. Nonetheless the song sets the pace for the concert. The band’s set is choice, they go into a favorite, The Ripper, or if you like Jack The Knife. The twin harmonized guitars of Tipton and Downing are perfectly in sync, the song also hints at the vocal effects Rob would employ. The mix of audience is just right, not too loud but nicely in the mix. Running Wild finds the mix going a touch louder and deepening in the bass, it sounds really good, Ian Hill will drive the pace for the rest of the concert! Rob’s intro to the crowd has him telling the audience this is their first time in Denver and introduces Living After Midnight as being their new single. Beyond The Realms Of Death is both beautiful and heavy and then they continue with the new song You Don’t Have To Be Old To Be Wise. Victim Of Changes is another classic, certainly top five and a set highlight. Iconic twin lead intro, the synergy between the band is at a peak, and the drumming from Dave Holland is really powerful, so much is the audiences’ response that Rob thanks them afterwards. Steeler is a chain saw riff fest, nice to have a couple great quality versions of this deep track that was rarely played live. To round off the set, the band hits us with the brutality of Tyrant. Damn this song reeks of metal swagger and aggression in a five and half minute span, KK and Glenns playing is so tight it makes my head swim, great song and spectacular version. Overall a performance that is a must for Priest freaks and fans of the metal genre.