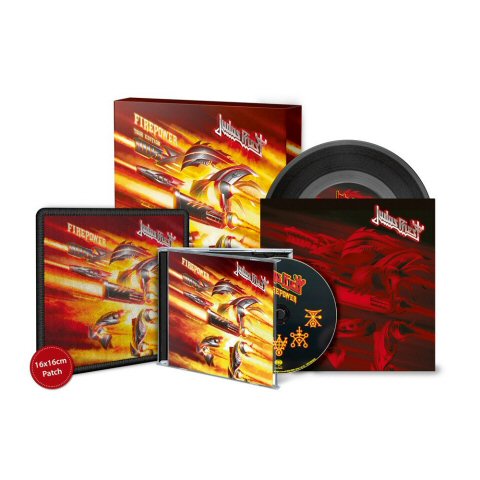 Box with firepower cd, patch and a vinyl single

There is no doubt that Firepower is going to garner some serious praise. This album puts the metal back in Priest … in a definitive “screaming for a painkiller British steel defense of the metal faith” kind of fashion. For those with patience, this is definitely the Priest album worth waiting for – for 28 years! While Angel Of Retribution whetted the appetite … it fell short. Where Nostradamus had heads scratching as to where this band was headed … there was still hope. With what Redeemer Of Souls promised but tried too hard to accomplish … sigh. Firepower definitely lives up to its name and represents the direction many fans hoped and presumed the band would go after 1990’s Painkiller. That album basically sowed the seeds for a whole new generation of power metal – one with a speed and aggression that had no regard for radio-friendly rock/metal. Unfortunately for Priest, the succession of albums that followed (two of them vocally helmed by Owens) left many fans up-in-arms and a bit disappointed. While it may be true that Firepower could be the last push for these ground-breaking/genre-defining metallers (age can’t be defeated), there is no denying the age-defying quality and intensity contained within these 14 songs. Halford sounds better than ever – his vocals right high up in the mix – and the venerable guitars of Tipton (and newbie Faulkner) cut through with conviction like it was 1984 all over again. Travis delivers a nice mix of speed and traditional classic metal drumming, and Ian Hill’s bass rumble drives Priest’s rhythm as always. No, die-hard fans of 70’s era Priest won’t embrace this, but those with an appreciation for the qualities that make contemporary metal compelling along with an acknowledgement that the melodic leanings of 80’s metal (without the cliché cheesiness) were integral in pushing the message to a broader audience will find Firepower both technically and stylistically worth embracing. Let’s face it, we live in a digital download era where records don’t enjoy the same impact they once had. It is unlikely that Firepower, as a whole, will have the same impact on the scene as Stained Glass, British Steel, Screaming For Vengeance or Defenders of the Faith … or even Sad Wings for that matter. But there is no denying the power in these songs, nor the perseverance of a band that was foundational in forging the way for so many others, for playing their integral part in the evolution of heavy metal. This is heavy metal – defined.