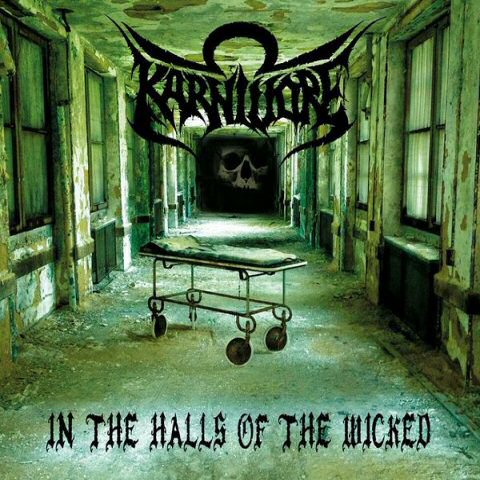 Karnivore -In The Halls Of The Wicked cd

In The Halls Of The Wicked is the sophomore outing from Swedish death-thrashers Karnivore (featuring current and ex-El Camino members). Vocalist Martin Holmqvist delivers some impressive vocals on this album and shifts between deathly barks, black metal rasps and thrashy growls. In The Halls Of The Wicked boasts eight rip-roaring tracks, with each delivering a weighty blow to the mid-section and should knock anyone for six, especially those with a passion for hard hitting and incisive metal. The opener, Under Ground, is a blistering affair which comes thick and fast, throwing punches and spouting flame upon the waves of aggressive guitar supplied by Jens Englund, whose style is a mix of the abrasive and the belligerent. Mattias Johansson is responsible for the ear-shattering percussion which races at quite a pace. On the Feast Upon The Living the trio strip the flesh with the sonic galloping, combining bludgeoning thrash metal with deathlier sneers but all the while fixing the listener with a cold, melodic stare. Slayer take note. The fury of Psycho chugs into motion and reduces the speakers to a bubbling liquid peppered with chunks of flesh. This is deadly thrash metal hinting at Sodom with its visceral intent; the drums batter and clatter like there’s no tomorrow, and with the riffs causing the blood to foam there’s really nowhere to run after this. The title track is a simmering beast lumping traditional metal chords within its chugging frame, but as the metallic wings of this demon unfold, Karnivore revert to type, doing what they do best and frothing at the mouth with their barrage of Teutonic-styled thrash. The album ends with Mr Gein (influenced by the crimes of serial killer Ed Gein), and on this track Johanssons terrific drum sound reminds me of what I miss from Slayer when Lombardo isn’t present. Mr Gein is an epic slice of the sinister and acts as a fitting climax to this brutal slab of disgruntled thrash metal; the sort of rage, angst and pugnacious ness missing from so many contemporary acts.