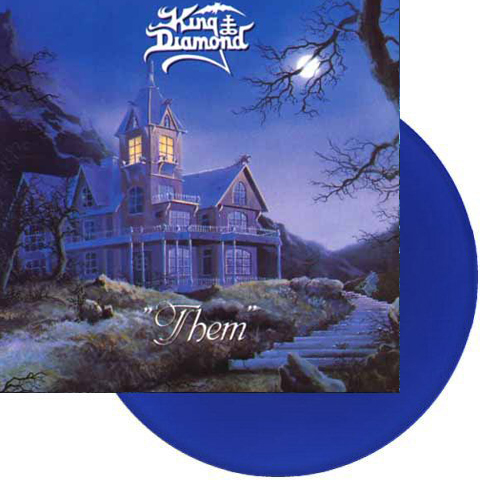 Following the incredible success of his second solo album, and first conceptual undertaking, Abigail, King Diamond set to work almost immediately on his next extravagant adventure in gothic storytelling with 1988’s “Them.” This time, he inserts himself among the story’s characters, which also includes his mother, little sister, a haunted house (naturally), and, more unexpectedly, a batty old grandmother whose return from a long stay at the insane asylum (famously announced by “Welcome Home”‘s borderline hilarious opening shrieks of “Grandmaaaa!!!”) precipitates the supernatural acts of possession, murder, and madness that move this tale forward. Also worth noting are the new musical players who had joined the King Diamond band on this outing. After all, the replacement of guitarist Michael Denner and bassist Timi Hansen by Pete Blakk and Hal Patino, respectively, signaled the King’s final break with his former band, Mercyful Fate. Tellingly, other than upping the overall camp factor just so, this development had no discernible effect on “Them”‘s musical vision as compared to Abigail, thereby confirming said vision as stemming from King Diamond himself. Now back to the music: co-songwriter Andy LaRocque once again delivers distinctive, semi-thrash riffs, majestic harmonies, and searing, inventive solo passages to standout moments like “The Invisible Guests,” “Tea,” and “Twilight Symphony,” but it’s small nuances such as the acoustic break in “A Broken Spell” and the oppressive synthesized clavichords heard on “The Accusation Chair” that lend “Them”‘s story its satisfyingly complex personality. What’s more, overly theatrical numbers like “Mother’s Getting Weaker” and “Bye, Bye Missy” take a little more license with their arrangements when incorporating the key words, plot themes, and even distinct character voices necessary to advancing the story line, but usually do so with very little detriment to the musical flow, which is occasionally embellished further by short interludes such as the title cut’s symphonic instrumental interlude, and the opening and closing vignettes, “Out from the Asylum” and “Coming Home.” As for King Diamond, he takes full advantage of the story’s various points of view to try on any number of vocal guises, but overall, he’s employing spiraling vocal chorales built upon layers of his instantly recognizable shrill falsettos far more frequently than his lower-register growling style. Ultimately, pundits generally found “Them” just slightly lacking in the face of Abigail’s rarely challenged excellence, but consumers ultimately disagreed, buying more copies of “Them” that any other King Diamond album before or after.