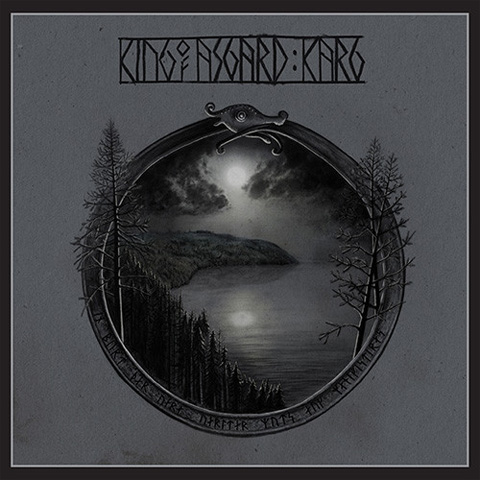 Formed from the ashes of the highly underrated Viking metal act Mithotyn, King of Asgard has more or less continued the mission statement of releasing odes to the northern winds, Viking valor and snowy landscapes, all heavily influenced by latter period Bathory as well as Einherjer, Ensiferum. Karg is their third such endeavour and it observes the traditions of its ancestors with all due reverence, while moving things in a darker, more stripped down direction. Its typical enough for the genre with an emphasis on sharp, glorious riffing and lots of olden style war chanting, and though it does nothing to push the style forward, its well executed to the point where that matters less. This is blue collar, working mans battle metal and as such, it an easy to digest, enjoyable listen filled with fist-in-the-air moments which go down even better when paired with several strong ales and an axe wound or two. This is one of those albums that lives or dies by the Almighty Riff and Karl Backmann and Lars Tangmark do a good job of casting a wide net of satisfyingly heavy, blackened Viking leads that carry the songs along, while spicing things up with doom and the odd traditional metal idea. Though things are kept pretty simple, they have an ear for harmony and melody that many of their contemporaries lack. That said, many listeners will feel like theres nothing here they havent heard elsewhere many years ago. Karls black rasp is mean enough for the music, but he rarely changes his delivery and some variety would help shake things up, though the clean chants are satisfying and add a crucial dynamic whenever they appear. Ill always miss the Mithotyn days of yore, and this is a happy reminder thereof. Ive enjoyed every King of Asgard album and Karg is no different. Fans of Bathory and Viking fare will certainly enjoy it and those frustrated with Amon Amarth recent output may also get a violent rush from it. Fight on, Sons of Wotan, fight on.

Track list:
1. The Runes Of Hel
2. The Trickster
3. Highland Rebellion
4. Remnant Of The Past
5. Omma
6. The Heritage Throne
7. Huldran
8. Rising
9. Total Destruction