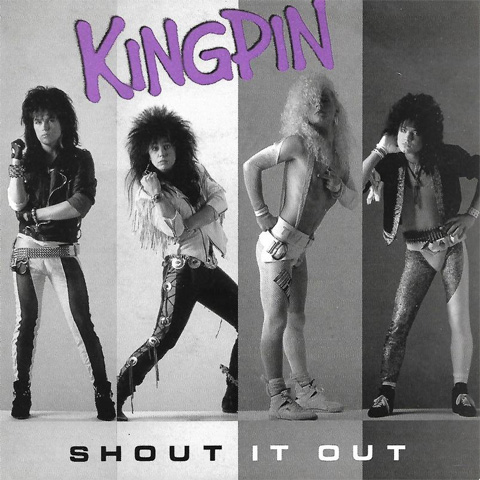 Kingpin -Shout It Out 7″

Often criticized for following whatever musical trend was popular at the time, Shotgun Messiah managed to transform from glam to sleaze to industrial with varying results. The band was originally known as Shylock in 1982, with J.K Knox (real name Jukka Kemppainen on vocals), Harry K. Cody (guitar), Tim Tim Skold (bass) and Krister Rispling (drums). When Rispling was replaced by drummer Stixx Galore (real name Pekka Ollinen drums) the band decided to change name to Kingpin. This line-up debuted with a two track demo the following year featuring the tracks ‘Squeezin’ Teezin” and ‘I Dont Care Bout Nothin”. Just prior to the recording of the debut album ‘Welcome To Bop City’ Kingpin added new vocalist Zinny J. San (real name Bo Stagman), who had previously fronted Easy Action. Their debut album ‘Welcome To Bop City’ was released in 1988 and featured the group in outrageous haircuts and outfits. A vinyl single with two tracks from the album was released at the same time. When the album did great locally the boys decided to uproot and head for the bright lights of the late 80s Los Angeles rock scene. Upon their arrival, Kingpin changed their name to Shotgun Messiah, toned down their image slightly and remixed ‘Welcome To Bop City’ as ‘Shotgun Messiah’. The album reached the Billboard Top 100 and the band was doing respectable business. This is the vinyl single released from the original Kingpin album, a rare single only released in Sweden

Track list:
1. Shout It Out
2. I Dont Care Bout Nothin