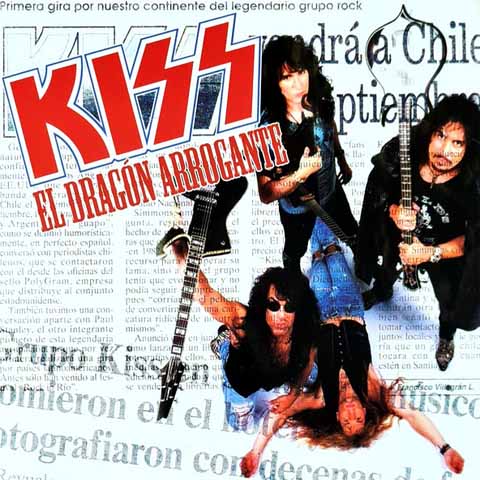 Kiss in Chile? If you ask any old Kiss fan in that country and they would say that it would never happen. Then in 1992 they started to hand out flyers to concert attenders of shows that would come up in 1993, it featured acts such as Def Leppard, Toto, Soda Stereo, Paco Ibanez, Metallica and last on the list was Kiss. While other bands came and went Kiss was still not announced. Then it happened in 1994. Kiss was supposed to play Santiago, at the Mapocho Station, on the 1st of September with Black Sabbath and Slayer. When the days started to come closer to show time, rumors started to go around that the Mapocho Station did not meet the requirements security for this type of event and talk about changing stadium or cancelling the show spread. Luckily none of this happened. Local group Tumulto opened and then Slayer and Black Sabbath set the bar high for Kiss to follow. The unbelievable roar from the stadium when the lights went out at 23:50 was just the start of a dream that finally came true. Eric Singers first hits on the drums to open Creatures Of The Night was the start of the madness. Deuce, Parasite, Unholy, I Stole Your Love, Cold Gin yeah one hit after another. After this Kiss would return to Chile in 1997, 2009, 2012 and 2015 but for all the countless of Chilean Kiss fans that had been waiting for years and saw all these gigs nothing can be compared to that first time in 1994. All shows might have been excellent but nothing beats the expectation and emotions that your first ever Kiss show can bring. This was the night and its beautifully conserved for the afterlife on this double disc and the bonus material here is almost shocking as you get soundtrack jam from the show where Kiss fool around with cover tracks and rare material