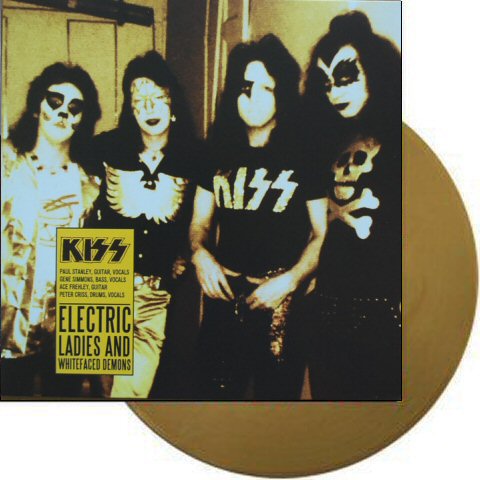 The Loft at 10 East 23rd Street in New York City is hallowed grounds for Kiss fans. Rented as a rehearsal area and sometimes crash pad by Gene Simmons and Paul Stanley in Mid 1972, they would audition for a drummer and lead guitarist and by Christmas time of that year KISS was born. The band would not only hone the musical aspect but also the visual representation that all considered of the utmost importance. At first they took inspiration from the up and coming New York Dolls and had a look that bordered on drag, thankfully the idea blossomed that would give way for Kabuki style make up and costumes of black. By March 1973 the band had called in a favour and got Eddie Kramer to record a demo for them and they started playing select venues. The rehearsals for the first summer shows of 1973 was recorded by Gene Simmons on a 2 track tape deck. These early recordings is an excellent document to further understand the evolution of KISS rise to stardom in the mid 70’s. The amateur recording is clear and the instruments are fairly well balanced, they all can be heard with emphasis on Paul’s guitar if anything. The vocals are low in the mix and much of Paul’s signing is barley audible during Strutter and Firehouse. There is some top end distortion present but overall it is not only more than listenable it is highly enjoyable. The recording picks up with some tune ups and the band plows into Strutter. It would be refined and simplified by the time the band entered the studio to begin recording the first record. Even in this stage it has all the swagger of the classic we all love, Ace’s solo is slightly different but really good, it has a laid back feel to it. There is some muffled conversation at its conclusion and either a tape cut or pause and Paul plays a little of the Firehouse riff while they get ready. Again Firehouse is slower with the tempo being slightly off, Gene plays a nice fat bass but the song really drags. Ace’s solos are busy but the lyrics are close to being done and Whew Whos are there. Curiously Watchin’ You is very close to the version that would be released on Hotter Than Hell. Let Me Know is one of Paul’s earliest songs, during this era it was referred to as Sunday Driver and while it was released on the first KISS during this time it is in need of some tightening up. One of the curiosities is getting to hear Life In The Woods. The vocals are a bit better in the mix and we get to hear Peter’s unmistakable voice. In the Paul Stanley biography I felt he kind of berated Peter’s playing, while he would struggle at being a technically perfect drummer this clearly shows how powerful a player he was and more than makes up for it with passion. He does some screw ups during the middle of the song and starts a chorus of “Fuck You “, he mentions The Daisy as they are in obvious preparation of the June 1973 gigs there. While the song is certainly not a contender to put on a recording it does serve to get the audience rocking. Another highlight of the tape is Acrobat, commonly referred to as Love Theme From KISS. Thankfully the song is linked with Your Much Too Young and is a real barn burner, Peter gets a quick mini solo and the band sounds almost like they are jamming a bit as they lock in and really pound out the main riff and Ace rips a classic solo. At the song’s conclusion all that is left to do next is push play and do it all again. This album includes this rare rehearsal recording as well as early demos