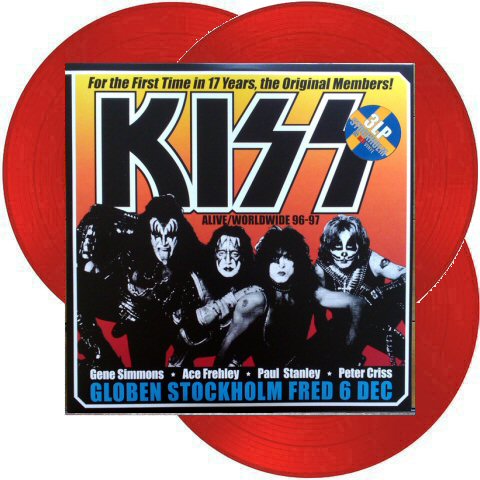 When Kiss were reunited in 1996 it was a big opportunity for many fans to relieve their youth. The Alive Worldwide tour was the first tour with original members Peter Criss and Ace Frehley since their 1979 Dynasty Tour. The tour would become the most successful Kiss tour to date. This show at the Globe Arena in Stockholm om the 6th of December 1996 was not just a return to the past it was a glimpse into what Kiss would be like today if the original members had stayed together and kept the make-up on. Paul and Gene, as usual, looked ready to party but not running around as much as they used to do, Ace preferred to let his fingers do the talking. Peter did his Charlie Watts imitation but was much nicer to his drum kit than he was when he was still in the band. However most people never saw the original band play live so for most of the people it was probably one of their best gigs they had seen and the band had all kinds of tricks throughout the show — mostly during solos by Ace and Gene — and laid down some of the most exciting theatrical entertainment ever seen by most in attendance. The band covered a lot of ground in the nearly two hours they were on stage. Songs such as “100,000 Years,” “Do You Love Me,” “Shock Me” and “New York Groove” were surprise and welcome additions to the set list, as these songs haven’t been played since the 70’s. However, missing were such staples as “Nothin’ to Lose,” “Hotter than Hell” and, most notably, “Parasite.” The show closer was of course, THE rock and roll anthem, “Rock and Roll All Night.” Seemingly hundreds of pounds of coloured confetti were dumped on the crowd, while Peter’s drum kit was high above the stage amidst all the pyro, lights, smoke and excitement that Kiss promised for their reunion tour