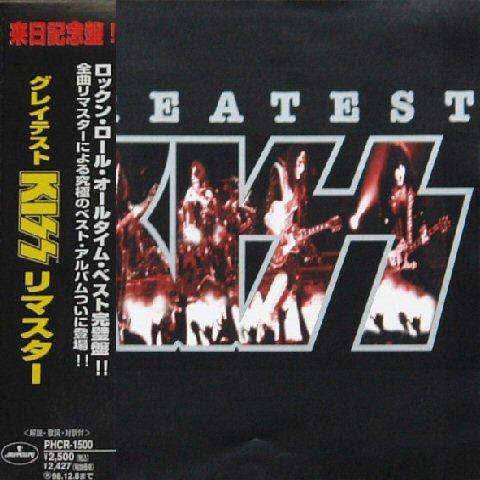 First Japan press (catalouge number PHCR-1500) with OBI-strip. The Japanese version has replaced Cold Gind and Plaster Caster with C’Mon And Love Me and Rock Bottom

Kiss has been the subject of numerous best-of compilations over the years, some released stateside (1978’s Double Platinum, 1988’s Smashes, Thrashes And Hits), while others only in specified regions (1982’s Killers in Europe, 1988’s Chikara in Japan, etc.). The 1996 collection Greatest Kiss was originally intended to only be issued outside the U.S., but since it was selling well as an import stateside, it was eventually issued domestically one year later. There are four different versions of Greatest Kiss, each including a slightly different track listing: European/Australian, Japanese, Mexican, and U.S. Instead of focusing only on overlooked songs not included previously on their past best-of packages, Greatest Kiss is an extremely haphazardly assembled collection since the majority of the songs have been included on the aforementioned collections (“Rock and Roll All Nite,” “Deuce,” “Beth,” “Detroit Rock City,” etc.). Tracks making their first appearance on a Kiss anthology are “Sure Know Something,” “Christine Sixteen,” “Plaster Caster,” “Flaming Youth,” “Two Sides of the Coin,” and a 1996 live version of “Shout It Out Loud.” Instead of getting it right and focusing only on truly overlooked gems (such as “Magic Touch,” “Larger Than Life,” “Shock Me,” “Parasite,” “Talk to Me,” “Rocket Ride,” “Watchin’ You,” “Mr. Speed,” “New York Groove,” “I Stole Your Love,” “King of the Night Time World,” etc.), Greatest Kiss ultimately misses the mark. For the newcomer, stick with 1978’s better-assembled Double Platinum.