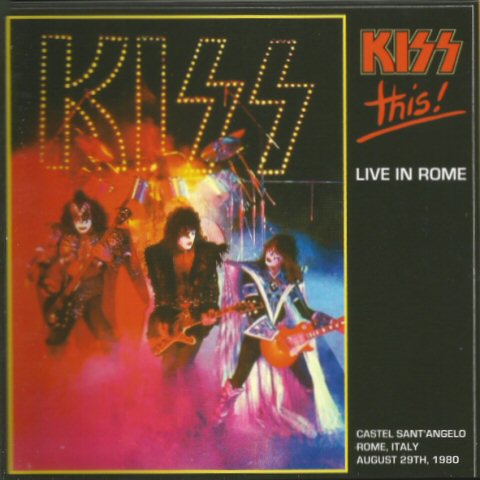 Kiss return to Europe in the summer of 1980 was much different than their previous trek in 1976. Their fame had grown making the group in much demand, and were greeted by a legion of fans eager to see the Kiss spectacle. This would give the band some much needed adulation as their star had fallen in America, aside from a one off concert to introduce new drummer Eric Carr at the Palladium in New York City, there would be no other dates. The 28 date European tour was a success, the band were pulling in great attendance numbers and on many of the dates they were supported by up and coming NWOBHM act Iron Maiden…what a bill. The concert at Castel Sant Angeli in Rome, Italy on the 29th of August is unique for a few reasons, most importantly it is the first recorded document of Eric Carr as drummer, having replaced Peter Criss officially in mid July 1980. There are many photos of this concert, so it is well documented that this is also the first appearance of his adjusted face paint, slightly adjusted after his NYC debut. The concert in Rome was also the first date on the tour so we get to hear the first ever live versions of three songs from Unmasked, most important is we have a very rare live recording of You’re All That I Want, a song that would be dropped a few dates later. The book Kiss Alive Forever features an interesting remembrance from the late Bill McManus, a lighting engineer, “When we did the outdoor show at Castel Sant’Angelo, we were testing the sound system and the pyro during “God of Thunder.” I remember a figure in white robes coming out on a third floor balcony about 150 yards away and looking at us and listening, seeing the columns of flames and shaking his head before finally going inside. Later that night, I mentioned this to one of the local interpreters, and he said that it was the Pope’s residence and that it was probably the Pope looking at our rehearsal. I thought that was pretty heavy.” The recording featured here is clear, well balanced with all instruments coming through in the mix and sounds like it was recorded close to the stage. The frequency range is limited to the mid and high range, not much bass and there is distortion present that gives it a nice rough edge, a very listenable and enjoyable document. The performance itself is great, the band are in fine form and ready to impress, one listen to this concert and you can hear the difference in the band, they sound tighter and more energetic than the somewhat lethargic Dynasty concerts. The set list features a nice cross section of songs from their back catalogue and the aforementioned tracks from Unmasked. The opening of Detroit Rock City into Cold Gin, into Strutter gets the ball rolling quickly, Ace is particular is on fire, he is quick in his playing and his leads are superb, he is definitely on. I’ve never been a fan of Unmasked, for me the record lacks edge, that being said the Unmasked material is really good live, Is That You? sounds heavy, certainly owing something to the distortion in the recording. The audience sound almost unresponsive to some of Paul’s raps, he talks of the beautiful women in Rome and gets no real response, they play Firehouse and they understand that, chalk it up to language barrier. We get some nice fills from Eric during Talk To Me when Ace does his “You…You..You” rap, he is quick with some tasty rolls, shades of things to come. Gene says his original demo for You’re All That I Want sounded more like Free than the final album track, the song was certainly better live as again it has a harder edge. Ace gets his solo first in his cover of The Stones 2,000 Man, and it kicks ass, again more killer leads and lots of sonic bomb’s ala Hendrix mixed with the Spaced out segments make for an aural assault on your ears. This concert features the famous 10 minute version of New York Groove, Ace was having guitar issues so Gene and Eric just keep on going with the drum and bass while the Spaceman gets things in order, Gene’s bass has a nice fat sound to it. While Gene’s bass solo is a bore to listen to, once the band break into God Of Thunder, the band hit a groove and it sounds rather evil. The Demon sings as if demanding his minions when he sings “I Command you to kneel”, it’s really striking in this recording. The band play unique chords just before a true highlight of this concert, Eric Carr’s earliest recorded drum solo as a member of Kiss. Needless to say, it’s three minutes forty seconds of Eric Carr exploding, he makes total use of his entire kit and the audience totally gets behind it, as did I. You can feel his excitement in playing with Kiss, certainly a huge accomplishment and he makes good use of every second. The encores are real good, Shout It Out Loud features the audience singing along, again the band is totally locked in and the song just drives fast, screams of “I Want You” are mixed with a “Go Home Yankees”, only at a Kiss concert. King Of The Night Time World starts with some on stage bombs, again the audience is in a frenzy as they clap along, further fuelling the band who seem to be playing in double time. One final song, one final highlight, Eric Carr’s vocal debut with Kiss, you can hear the passion in his vocal for Black Diamond, for me one of the few times he would equal Peter’s vocals. The dramatic ending and subsequent explosions leave no doubt, Kiss is back with a vengeance. A superb concert that sets the bar very high for the rest of the tour.