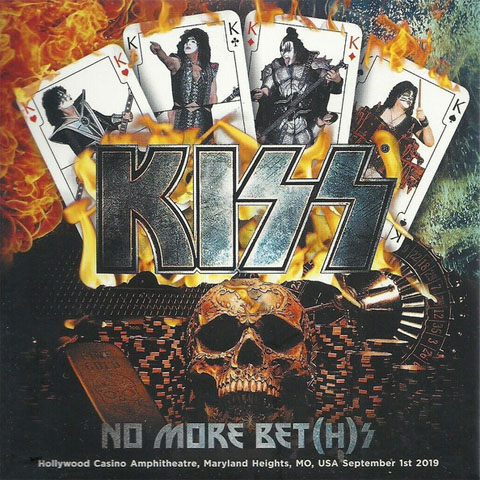 “Can you feel the heat?” the guy with the crazy eyes screamed excitedly at me as Kiss rocked in front of towering flames and thousands of fans at the Hollywood Casino Amphitheatre at Mayrland Heights on September 1st 2019, where this abum is recorded. If I had to guess, I suspect you could have felt the heat even out there in the lobby. Few rock bands blow stuff up quite as good as Kiss. And with this being the End Of The Road farewell tour, the flames and fireworks were really flying. They naturally made an explosive entrance for set opener Detroit Rock City. Rockets fired off across the ceiling of the packed arena, as Gene Simmons, Paul Stanley and Tommy Thayer descended onto the stage on separate platforms, a shower of sparks raining down behind them. There were enough fire and fury to have pyromaniacs tongues wagging like, well, Gene Simmons. Near the end of Black Diamond, stoic drummer Eric Singer pointed to different parts of the stage with his drumsticks, cuing up bursts of fireworks, the song’s bombastic finish accompanied by spinning cartwheels of white sparks — and more explosions. Kiss even stuffed a blinding fireworks display into a seemingly random lull during Psycho Circus. And Thayer occasionally interrupted his solo during Cold Gin — just one of his many dazzling guitar moments — to launch some fireworks from his instrument. Along with the greatest hits, the fans no doubt wanted the greatest bits. And so Simmons spit fire near the end of War Machine and during a bass solo for God Of Thunder, opened his mouth and let a pool of blood dribble down his chin, his tongue slashing around, looking like that creature in Alien after it burst out of that guy’s chest. And frontman Stanley rode a zip line over the crowd to a secondary stage in the back of the arena to shimmy and sing Love Gun and I Was Made For Lovin You. Stanley made sure to pay plenty of lip service to the fans as well, their energy just as critica as the stage spectacle and band’s showmanship. Only two songs into the show, Stanley divided up the crowd for a little screaming competition, a stale bit that the Kiss Army nevertheless adored. The lights went up several times so fans could make cameos on the video screens, and their singalongs were the centerpiece to several songs, overshadowing the pyrotechnics during Shout It Out Loud and Lick It Up. The band saved the biggest crowd-pleaser for the end with Rock And Roll All Nite. A blizzard of confetti engulfed the fans on the floor, flamethrowers went into overdrive, rainbow-colored fireworks leaped into the air and Simmons and Thayer rode platforms that swung over the arena’s lower bowl as they sang about wanting to rock all night and party every day. Kiss embraced those words across the two-hour show. Between Stanley and Simmons gleeful showmanship and Thayer and Singer’s flashy musicianship, it’s hard to imagine a band that’s still this good is really going to say goodbye to a fan base that’s still so dedicated. But if indeed this is the End Of The Road, Kiss in Hollywood went out in a blaze of glory.