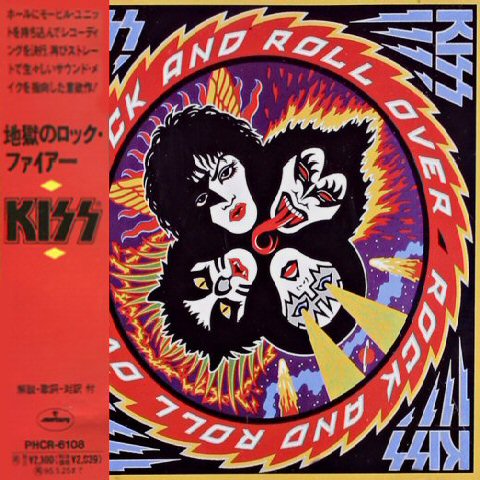 1993 Japan press with OBI-strip. This is part 6 in the 20th anniversary series. If you get them all then it creates the Kiss logo on the spine

With the massive success of their previous album, the experimental Bob Ezrin-produced Destroyer (which contained the surprise ballad hit “Beth”), Kiss could have taken the safe route and continued in that direction — or return to the raw hard rock of their first four albums. They chose the latter. Hooking back up with Eddie Kramer, the producer of their 1975 breakthrough release Alive! and their very first demo, Kiss rented out the Nanuet Star Theater in upstate New York to record their next album, Rock and Roll Over. With a more direct, in-your-face production, Rock and Roll Over is one of Kiss’ most consistent records. Two of the album’s best tracks became hit singles — the sleazy hard rocker “Calling Dr. Love” and an acoustic ballad that was originally intended for Rod Stewart, “Hard Luck Woman” (later covered by country star Garth Brooks). But like all other classic rock albums, the lesser-known material is often just as strong — “I Want You” and “Makin’ Love” became concert staples over the years, while “Mr. Speed” is one of Kiss’ most underrated songs ever. Also included are the fan favorites “Take Me,” “Ladies Room,” “Love ‘Em and Leave ‘Em,” and the original version of “See You in Your Dreams,” which was later re-recorded for Gene Simmons’ 1978 solo album.