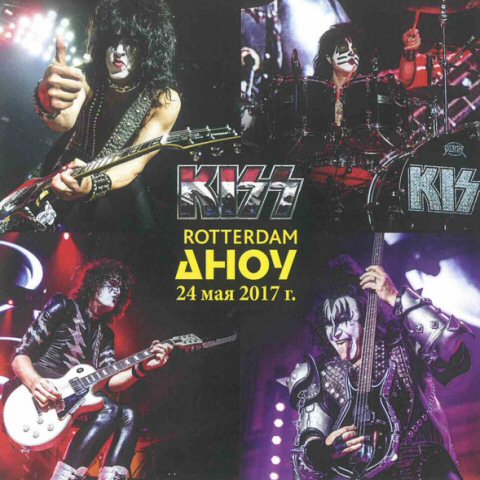 The Kiss show at Ahoy in Rotterdam, Holland on the 24th oMay 2017 is just two songs old when singer and guitarist Paul Stanley asks for a moment of silence for the victims of the terrorist attack in Manchester two days earlier. Ten thousand throats remain silent, everyone satisfies the request. It is an impressive experience. The effect of the gruesome act can also be felt in other ways. A large number of police are present outside the hall. All visitors are thoroughly searched at the entrance and checked at a second entrance with a portable metal detector. All large bags must stay behind at the cloakroom. It is a new reality at a time when nothing is safe anymore. Yet it is encouraging to experience that Kiss performance nevertheless becomes a party. In interviews, vocalist and bassist Gene Simmons had already announced that the band would stick to the packs from the Creatures Of The Night era, an album from 1982, for this new concert series. Also the emphasis would be more on obscure, never before played songs. The outfits are there, but the performance winds up along proven success numbers such as Deuce, Shout It Out Loud, Lick It Up, Crazy Crazy Nights, Rock And Roll All Nite and as I Was Made For Lovin You and Detroit Rock City. So not so much based on the Creatues Of The Night album or the obscure songs. Its obvious that Kiss is a company that will ultimately never take too big risks. So we have the familiar You Wanted The Best introduction that has kicked off the show since the seventies, we have Gene Simmons spitting fire during Firehouse and the same Gene that bleeds to introduce God Of Thunder. Paul Stanley flying over the audience at the end of the show and playing some songs on a small central stage. Before that we had Paul splitting the audience in half to so see which half of the room that can shout the loudest? And then of course there are the traditional explosions, flashing flames and confetti cannons. All this has already been done dozens of times but at the same time its exactly this kind of ingredients their loyal fan base wants. There are now probably three generations of Kiss Army fans in the crowd so for some it might be the first time. For the new and younger fans this is an experience of a lifetime and for the ones that has been loyal since the 70s its probably a track like Flamin Youth that becomes the highlight of the show. This song from the 1976 Destroyer album has not been completely worn out during the decades and comes as a nice surprise. Kiss Army fans are also the forgiving kind and the voice of Paul Stanley has been showing signs of wear and tear for years. It hurts to hear him scream the announcements or struggle with some of the vocal lines. But the fans helps him sing a long and shouts and screams to drown out the mistakes, all for the love of the band. So with warts and all Kiss is simply irresistible and fans still sing Kiss songs after the show while leaving the hall or going to the toilet. The test of time might show but the magic is still there