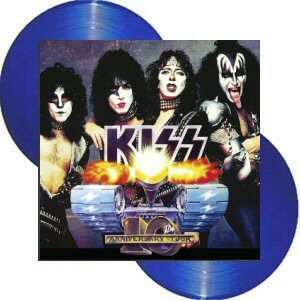 Kiss releases ‘Creatures Of The Night’ on the 25th of October 1982 and by the same time lead guitarist Ace Frehley decides to leave the band to pursue a solo career. Frehley is replaced by Vinnie Vincent in time for the Kiss ‘10th Anniversary Tour’. Vincent is given the character of an Egyptian ankh warrior. Just like Criss with Unmasked, Frehley had not played a note on Creatures.(although rumors say otherwise). The ‘10th Anniversary Tour’ was the second tour with new drummer Eric Carr but his first tour that took him through United States. It was of course the first tour with Vinnie The Wiz Vincent. The groups’s lucrative record contract with Polygram required Kiss to be composed of founders Gene Simmons (bass), Paul Stanley (singer/guitarist)- and Frehley. The release did not say Frehley had quit, but instead stated Frehley was too injured from a recent car crash to tour, but might make appearances onstage when able. The band used group photos containing Ace Frehley for the tour’s press kits and ad material during early dates; these were used by promoters for advertising, so many fans did not realize Frehley was replaced until they came to the venues. Before Vincent was announced, new photos were taken and later dates featured the band with Vincent in show ads. The tour was billed as their “Tenth Anniversary Tour” and silver was used in tour promotion and for the guitar pick and drum stick signatures in keeping with a ‘silver anniversary’ theme. The band sold tee shirts, jerseys, black baseball caps, and pins at their concession stands. The tour program was not available for sale until mid-February, shortly before the tour ended; making it one of the rarest Kiss programs and very sought after by fans of a certain age. The tour started out on the 29th of December 1982 and it ended on the 3rd of April in 1983 a tour that took them through Canada and Usa only. However attendance during this North America tour was abysmal; even though the band had returned to its signature hard rock after several years of pop and disco-influenced music, very few people showed up at the concerts on the tour. Co-frontman Paul Stanley recalled a show in Lexington, Kentucky (on the 6th of January) where he threw a pick that went over the entire audience of 2,500 and hit the floor. The announced gig at Civic Center in Providence on the 23rd of January was cancelled due to poor ticket sales (less than 2000 tickets sold). The band decided to cancel the rest of their touring plans but instead they were offered 3 dates in Brazil in June, where they played to the biggest crowds of their career. The third and last gig in Brazil was at the Morumbi Stadium in Sao Paulo on the 25th of June would be the last time Kiss would perform with make-up until the Reunion tour in 1996. Anyone that saw the band in December of 1982 was in for some special shows as two tracks from ‘Creatures Of The Night’ were performed live. ‘Rock And Roll Hell’ was dropped after just two shows and ‘Keep Me Comin’ was dropped after a few shows. At the beginning of the tour the whole band sang the chant that opened and closed their new, main single ‘I Love It Loud’ but by the middle of the tour this was changed and only Simmons sang it. This Japanese pressed album, simply called ‘10th Anniversary Tour’ was recorded at the Universal Amphitheater in Los Angeles on the 27th of March 1983. More than 6000 concert goers had attended this show (ticket price $13.50) where the band performed amongst others, ‘I Want You’ a track that had returned for this tour for the first time since the Alive II Tour in 1978. The people that came in time to see the opening act for the evening would witness a young, hungry L.A.-based quartet named Motley Crue, who turned in a nine-song set list featuring tunes from their 1981 debut album, ‘Too Fast For Love’, and their then forthcoming sophomore album, ‘Shout At The Devil’. This recording was first released on cd in Japan only but that one has become a very rare item indeed during the years of its release. However due to the limited cd capacity the last part of ‘Black Diamond’ and the three encores (Strutter, Shout It Out Loud and Rock And Roll All Nite) were missing. This double album now features the complete show besides the Shout It Out Loud track