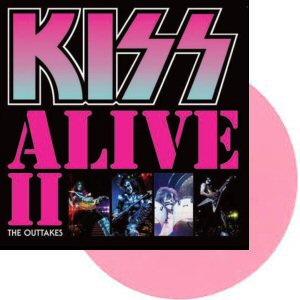 On March 18, 1977, Kiss arrived in Japan for the first time for their ‘Sneak Attack’ Tour. The band flew into Narita International airport in Tokyo on Pan Am flight #801, christened the “Kiss Clipper,” which was actually painted on the side of the Boeing 747. When Kiss flew into Japan for their first tour there, they spent two hours on the plane before it landed putting on their make-up for the fans. Trouble was, when they got to immigration, the officials wouldn’t let them into the country until they’d taken it all off so that they could compare their real faces with the photos on their passports.” They had to go into a bathroom, take the makeup off to clear customs and then re-apply it back on. And they allowed a sketch artist to draw them sans make-up. It was announced with pomp and jubilation Kiss national progress towards Japan. The name of the tour is “The Attack Of The Snake” in reference to how some journalists called to Kiss by that time as “The Serpent Of Rock And Roll.” Gene Simmons: … Clearly, when we went to Japan it felt like another planet because from a westerner’s view, everybody looked the same. There was a height and color of hair. There were no blondes whatsoever. Everybody was five foot two. If at any time we felt like strangers in a strange land, that was it. We towered above them. We always wore our heels. We were close to seven feet tall. You’re talking about people who are five two. When we got off the plane we looked around and thought, “What planet is this?” The food was bizarre. People are eating suction cups and raw fish. On the other hand, I have to tell you we never met a people that were more cordial and kind. Clean, responsive, professional, attentive, thorough. The fans were a combination of the most well-behaved and the most psychotic fans you’ve ever seen. They would stay seated because it was a rule with cops there. If you rush the stage they get in there with the billy clubs and the dogs and that’s it. So they would remain seated while we played. At the end of the song the only thing that was missing was a Buddhist setting himself on fire. Then they’d sit back down”. With the first weekend spent recuperating from travel at Tokyo’s Hotel Okura, touring events didn’t commence until Monday 21st. After a weekend of rest and Tokyo sight-seeing the band held a press conference at the Tokyo Hilton before departing for Osaka on All Nippon Airways in the evening. Kiss played their first ever Japanese concert on March the 24th at Kosei Nenkin Hall in Osaka, Japan. After more shows and more press conference and promotional work the band finish the tour with 4 shows at the legendary Budokan Hall in Tokyo on the 1st, 2nd and 4th of April (the band did two shows on the 2nd). This album features material from tehse shows at Budokan in April. Especially material from the 2nd of April were readily mixed and mastered and the material was obviously planned as the official Alive II release. The project was then cancelled and a half year later the well-known studio-polished Alive II album was released instead. Hearing the original recordings one can say, that most of the stuff on Alive II are overdubs laid down in the studio. Songs on this album are way rougher and more kick-ass versions than on the “commercialised” official version. So for any Kiss fanatic it is a great piece to own.