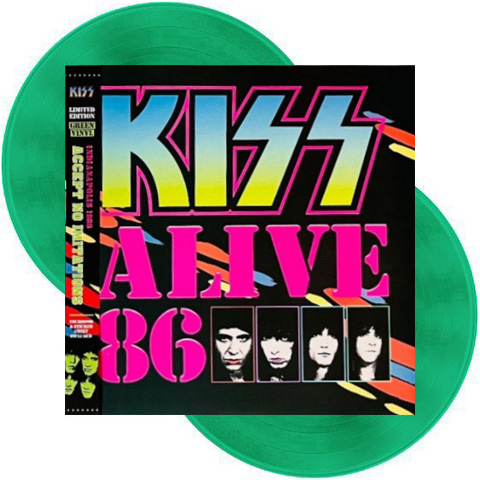 The 1985 long player, Asylum, was the last of a strong four record stretch where they seemed to be able to undo some of the damage from earlier in the decade. The band got their priorities right, making ass kicking rock and roll. In the mid 80’s hard rock was at its apex, Heavy Metal bands like Maiden and Priest ruled while hair metal had their queens like Motley Crue and Poison, Kiss was also able to cross over and appeal to both genres and the band was able to reinvent themselves. Image is just that, an image. They needed to be able to deliver and records like Creatures Of The Night, Lick It Up, and Animalize did just that, the singles received heavy rotation on radio and MTV and some 35 years later, much of this output still sounds as fresh and relevant as it did then. The tour to support Asylum began in late November 1985 and would run until mid April 1986 with all but two dates, one in Canada and one in Puerto Rico, being in the United States. This album features a concert from Indianapolis, Indiana. Kiss has always been embraced by Rock fans in the Mid West, their no nonsense Rock attitude has given them a solid fan base since the mid 70’s. Typical for the mid 80’s, the band play a high energy show yet when compared with other tours, features one of the shortest set lists that focuses on their 80’s output with just a few classics thrown in. Based upon the reaction from the audience during Fits Like A Glove, the lack of older material is not a concern. In fact, the audience is really into this show, seems to be a lot of girls in the audience and they are digging the sexual innuendo of the music as well as Paul’s “sexy” song introductions. It sounds as if Bruce Kulick plays a bit of the Scorpions They Need A Million riff during his guitar solo, I really like how he and Eric Carr do a brief guitar drum jam that is brutal, wish they had time to elaborate. The middle segment of the set is really good beginning with the underrated Paul ballad I Still Love You, he hits some really great high notes. I Love It Loud, Tears Are Falling and a furious Love Gun are entwined with solos but lose none of their effectiveness. The band do a bit of jamming in the encore and we are treated to the band jamming loosely on Oh Susana then Paul talks to the cool people and breaks into Led Zeppelin’s Whole Lotta Love with Bruce doing the famous backward slide part and their brief version of the middle section as well. If that wasn’t enough they do a killer version of The Who’s Won’t Get Fooled Again that has the audience going nuts. These two songs were common in the encore slots for this tour but are always great to hear and in really nice quality as well. Black Diamond was not played on this tour so the concerts ended with Lick It Up, ending a really well played and enjoyable concert. For fans of Kiss 80’s output its a must with this great concert