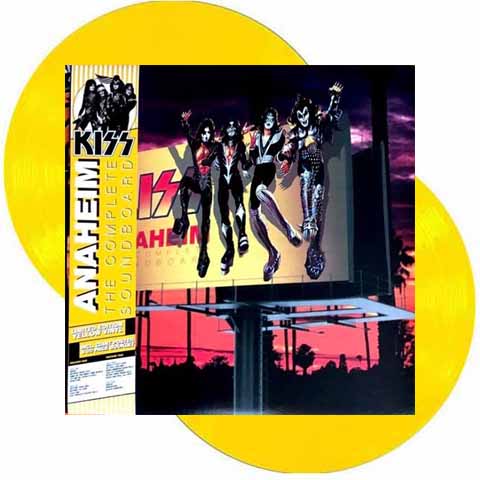 The band’s gig at the Anaheim Stadium in the summer of 76 (August 20th infront of 43 000 people) was a massive event, not only did it feature opening acts Ted Nugent, Montrose (Uriah Heep were scheduled to play, but were replaced by Montrose), and Bob Segar, but to go with a psycho circus type atmosphere the band employed a high wire act and a hot air balloon that landed at the stadium. The band knew how big this event were but they still managed to deliver a tight, energetic and professional performance, the recording begins with the band being introduced by Flo and Eddie, the duo who were part of the very popular group The Turtles in the 60’s and would eventually join Frank Zappa’s Mothers Of Invention. On this evening they put on make up and poor man’s KISS style costumes. Kiss take the stage with “Detroit Rock City” and its linked non stop with “King Of The Night Time World”, a most effective opening attack. Paul greets the audience of 43,000 and quickly gives the mic to Gene for some “Rock And Roll”, in the form of “Let Me Go, Rock And Roll”. Always a song to get the blood pumping the band go for the throat with this song, Ace’s solos are melodic treats for one’s sonic appetite and Peter is playing extremely well giving a tight, unified backbone. Paul introduces “Strutter” for all the ladies who like to get dressed up, if there is one downside to this recording it is the lack of the audience and the ambience you get from them, you have no problem telling that this is a great night for the band and you know the LA audience is going bonkers. “Hotter Than Hell” is linked with a brilliant “Nothin’ To Lose”, we get our first taste of Pete’s singing and he is spot on, he does a little vocal improv as he sings “C’mom shake it for Pete” as it is clear the band are enjoying themselves. Paul salutes California as the state of sun and sin as his introduction for quenching ones thirst, of course the audience knows where he is going and even though they are low in the mix you can feel their presence as they scream for “Cold Gin”. The song is the vehicle for Ace’s solo spot, because he is low in the mix his guitar has a cool other world feel to it that only adds the outer space vibe of his onstage persona. A trio of new songs is next, “Shout It Out Loud” and “Do You Love Me?” do not stray from the versions found on Destroyer, “God Of Thunder” on the other hand is now the Gene blood letting routine. Ace helps things along by teasing the songs main riff before Gene answers with his elephant fart solo, full of phase and echo makes for an ominous sounding intro, Peter’s use of gong signals the beginning of the piece. The tempo is similar to the records, in future tours they would play it faster and this is a song that works best when played a slower pace, as the Lord of the Wasteland grinds us to a pulp. The song is also used for Peter’s showcase, earlier in the tour his solo was found in “Watching You”, by this point in the tour the band had dropped the song and would be included in during “Thunder” for the remainder of his tenure with the band. The momentum is at its peak as the band hammer down with “Rock And Roll All Nite” to finish the main set, the crowd’s ovation is huge as Paul says “Anaheim We Love You!”. Even though they are low in the mix you can hear the chants of “We Want KISS”, they will not have to wait long as the band return with “Deuce” to get the encores started, what better song than that? The sound quality is down a notch but clears up for a red hot “Firehouse” and the traditional ending of “Black Diamond”. No introduction or fanfare, just Paul and his guitar makes for an incredible opening of the song. Peter turns in a wrenching vocal and Ace’s solo screams in pain, the band punctuate the last line of “Black Diamond” and go into the dramatic ending as sonic booms explode overhead. Interestingly the recording goes on and you can hear the booms going off in the distance as the show ended with a huge fireworks and the event fades into the sunset. To finally get this mega show from a complete soundboard recording is amazing. The only down thing with soundboards is that it lacks to much of the crowd noise but its Kiss in their prime and superb show, one that deserves repeated listenings.

Peter Criss: “That’s my favorite gig of all gigs with KISS, because it was the biggest. It was so exciting. I remember going down to the stage in golf carts, getting closer, and hearing the roar of the crowd and these people stomping on these metal seats through this huge stadium and the echo. I’ll never forget that sound. My heart pounded like it was gonna go through my chest. When I hit that stage and those bombs went off, forget about it…”

Ace Frehley: “That was a gas. That was a real special night. Not only was it a great show but after the show a lot of celebrities were there, like Billy Crystal and Mackenzie Phillips.”

Lydia Criss: “Kiss wasn’t particular used to performing outdoors and they didn’t want to go on until dark so that the lights and explosives would be clearly visible, but the weather was threatening rain. They were concerned about being electrocuted if they played with wet equipment. They were faced with having to make an important decision. After many suggestions, they decided to compromise and play at dusk. It was their first mega-show and because of the humidity, it was the first time I saw Paul Stanley with mega-hair. That was the biggest I had ever seen Paul’s hair. Luckily, the show was completed before the rain.”