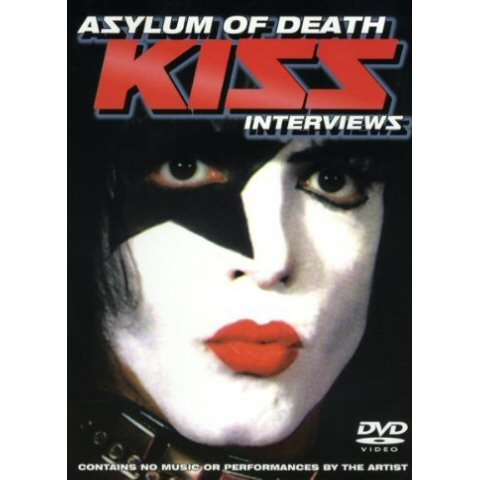 Asylum Of Death is a collection of interviews and TV news pieces but unlike the oddball collection on Krazy Killer, there’s a bit more continuity here as many of these clips are from the Dynasty era. This is fine by me because I always thought Kiss looked pretty cool during their disco rock phase (or as Ace calls it during an interview rock disco). I found it funny during one interview Ace is asked why they decided to go disco. He explains that it’s really only I Was Made For Lovin You that is rock disco and somehow ties this into a statement that disco is dying then three sentences later he says disco is hot right now. Of course, Paul steps in as the consummate promoter and says they must have done something right because the song is number one or number two all around the world. The very first clip features the infamous appearance by Gene on The Mike Douglas Show in 1974 during the bands debut album tour. This is not to be missed; Gene looks like a vampire in his crazy outfit. Then we get into an unmasked interview featuring Kiss except they all have their backs turned to the camera. Next up is a round of Dynasty period interviews and then the video jumps to 91/92 with what I guess is the British MTV doing an interview with some guy who runs the KISS Museum and is a collector and seller of their memorabilia. The final piece is an interview in England, by the same MTV person who interviewed the museum guy, talking to Gene, Paul, Eric Singer and Bruce Kulick. It appears to have taken place shortly after the release of Revenge. It’s an interesting piece notable for when the discussion turns to Eric Carr and after a few sombre answers from Gene and Paul, you could visibly see talking about this was getting to them and they told the interviewer it was time to change the subject because they’d rather not dwell on not having Eric and would much rather celebrate the times they did have with him. I’ve read a few negative things over the years knocking Gene and Paul for the way they handled matters while Eric was sick, if there’s ever any proof that these guys truly cared for Eric and it was a tough situation for them as well, this interview is it. It is during this interview where Paul and Gene state Revenge is heavy and almost like a return to the first album. Paul goes onto say this is Kiss being true to themselves and not following trends. Pretty funny when you consider 30 minutes earlier on this video he was defending their rock disco album! He also bashes the power ballad craze of the day and likened Everytime I Look At You to a Led Zeppelin or Rolling Stones ballad that has nothing in common with the pop metal (pap as he called it) ballads. Again, this is humorous because Kiss did their best to fit into the 80s pop metal (the very scene their true selves inspired). This is a solid collection that I’m sure hardcore Kiss fans will appreciate. There’s even an interview conducted by Billy Crystal! The sound and picture quality varies, but it’s acceptable for clips that date back to the late 70s. At one hour and not to expensive, this really isn’t a bad purchase for those that are huge Kiss fans. Buy It! Petal Productions has sourced the content of this program from various private collectors, including fans and enthusiasts. This material is presented for the first time ever in a dvd format and is an essential item to complete your current music collection. This dvd contains no music or performance by the arits but odd archive footage that can include a variety of private and TV material. For true fans, these insights show another side of the music that we all know and love.