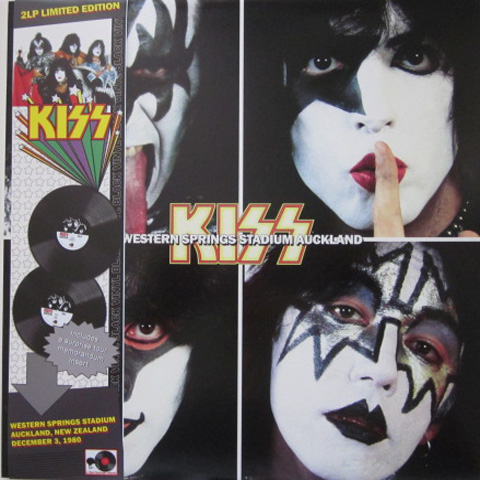 By the time KISS eighth studio album Unmasked was released in May 1980, the band was in the throes of their first upheaval with the departure of original drummer Peter Criss. While he appears on the record art work and in the promotion film Shandi, he was, for all intent and purposes, not a member any longer. The band was also feeling a backlash in America where their gluttonous output of solo records and merchandising had greatly affected their popularity and while the album would reach a Gold certification the band would not tour their homeland in support of the record. There were other opportunities, the band had not toured Europe since mid 1976 so a tour there was a no brainer but undoubtedly the highlight of the Unmasked tour was the band’s inaugural trip “Down Under”. The tour would consist of 11 dates and found the band playing to capacity crowds, the media coverage was everywhere and the band found themselves in another case of KISSmania. The last concert of the tour found the band playing to a capacity 25,000 fans in Auckland, New Zealand’s Western Spring Stadium, on the 3rd of December 1980, where this album is recorded. What makes this concert unique you ask? It holds a special place in KISStory as being the final concert played with Ace on lead guitar until the 1996 reunion tour. The main recording is an excellent soundboard recording, all instruments and vocals are clear in the mix and as with many soundboard’s, the audience is low in the mix although you can feel their presence, it also passes the real test as it sounds great when cranked up to 11. The intro is interesting, the sounds of some sort of mechanization followed by the “You wanted the best” introduction all leading into the band taking the stage with a blistering Detroit Rock City. Eric Carr’s drums have a wonderful sound to them and we can really enjoy his playing throughout the concert. Cold Gin follows non stop and features Ace and Gene sharing lead vocal duties, something I applaud as it gives the song much more depth. The band are not done and before the last notes of Cold Gin fade they plow right into Strutter, a song that the band had not played since 1976 and “dusted off” for the Unmasked tour. Paul finally gets to address the audience and includes the “Rock and Roll party” rap before introducing Shandi, a song that was a huge hit down under and was played specially for the Australian audiences. A standard Dr Love is linked with the song, Eric plays a great mini solo during the songs pause part that is great. Two of Unmasked strongest songs make the live cut so to speak, and are better songs for it. Ace gets a nice ovation as Paul introduces Talk To Me, the song has more balls live and features again great Eric Carr drumming and a great Ace solo. The second Unmasked song is the best of the lot, a nice fat riff coupled with a catchy chorus with interesting lyrical content about an interlude with a dominatrix. Ace gets more love with his cover of the Stones 2,000 Man from the Dynasty record and the new vehicle for his solo segment, the crowd is in awe of the Spaceman and you can hear them cheer loudly between notes. I Was Made For Loving You has a faster tempo and Paul singing falsetto and using some vocal effects to emulate the record version, Ace plays a too short blistering solo that is fantastic. A funky New York Groove follows with Ace giving some NYC landmarks little shout outs, obviously proud of his home town. Paul does a short intro for Love Gun promising the band would return the following year, they would not return Down Under for 15 years. Gene gets his solo spot next, the audience reaction is what you listen for as his solo is used to accentuate his movements, he does get a little participation going with his “Oh Yeah” call and response segment that leads into God Of Thunder. Eric takes his solo spot and it starts off slow and steady but he keeps adding more fills and before you know it he is playing a very rhythmic solo that is quite enjoyable and long clocking it at 8 minutes! A standard Rock And Roll All Nite finishes the first disc and the main set, it does contain Paul getting into a bit of the “Do you believe in Rock and roll?” rap and pits Auckland against the audience from a few nights earlier in Wellington. The encores are standard fare; the beginning of Shout It Loud was missing from the soundboard so Godfathers dug out an audience source for Paul’s introduction and the first 8 seconds of Shout It Out Loud, the recording is very distant poor quality but is clear enough to hear Paul’s comments. King Of The Night Time World follows on its heels complete with some pyro for good measure, it’s party time and the band are going for the kill. Black Diamond is the culmination of the concert, the opening notes are short but dramatic and we get to hear Eric Carr doing lead vocals and Ace is incredible on the leads, giving his all to the very end so to speak. For being so far from home and it being the last concert on the tour the band turn in a superb and professional performance and an end of an era so to speak.