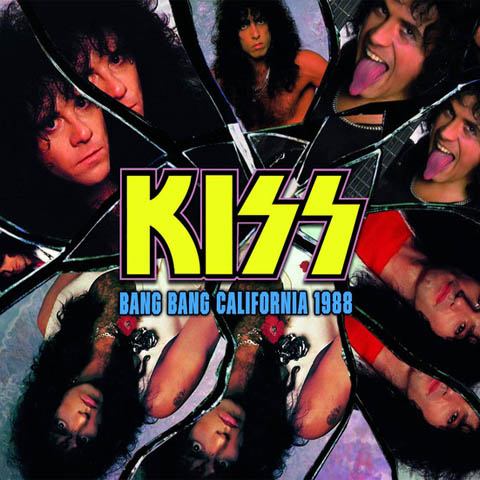 Double cd in digipak cover featuring two nights from the last part of the American leg of the Crazy Nights Tour. Limited 100 copies

The Crazy Nights World Tour started in the States in November of 1987 and the band would tour Usa and Canada up to the 2nd of April 1988. The band also got a hit in Europe with the Crazy Crazy Nights single so the band got a chance to tour Europe and even perform at the 1988 edition of Monsters Of Rock (opening up for Iron Maiden). This double album features two of the last shows from the US tour namely the ones at Arco Arena in Sacramento on the 28th of March and the following show which took place at Bill Graham Civic Auditorium in San Francisco on the 30th of March. The set list was pretty much the same since the beginning of the tour. The only thing was that the band had dropped the song No No No from their set list. This track would be back on the set list when the tour continued to Japan and Europe. Stanley, Simmons, Kullick and Carr tear through Katalog classics from their 1974 debut album, Rock and Roll Over, Destroyer, Love Gun, Asylum and plenty more in a sonic showdown from the one and only kick ass rock n roll combo from Queens NY. The tour was also stripped down with no rising drum kit or stunning pyrotechnics. So the bare bones set gives Kiss a fresher feel. Stanley and Simmons strut around with great showmanship and as ever Eric Carr goes full throttle on the drums. Eric Carr and Bruce Kulick rose to the challenge and gave a Kiss a hard, professional sheen. Meanwhile, behind the curtain stood Gary Corbett, thickening up the sound with additional keyboards and backing vocals. The show kicks off Love Gun and Paul sounds youthful and fantastic. Eric drives the beat and he is a more of a rock drummer than Peter ever was. Bruce is technically, the best guitarist they have ever had even though he still doesn’t have Ace’s feel, his solos are his solos, no copycat going on here. Aaron Roberts, gave the show a positive review. He opened by stating that the band had thrilled the audience with a blend of both classic and new songs. He praised Kulick on his speed and skill during his guitar solo as well as stating how equally impressed he was on Carr’s drum solo. He noted on the audience being a blend of teenagers and young adults, who previously got into Kiss as teens – citing their reactions that it didn’t matter that only half of the original group was performing the classic songs, as well as the cheers and the glow of hundreds of lighters to bring the band back on stage for an encore. Another reviewer thought the band had problems to excite when the stripped down the show and wrote that the band had ‘staged a circus, but lacked excitement’. He noted on the set design being simple as well as the members performing well, but not outstanding. In a closing statement, he said that the group’s music wasn’t strong enough to carry a show on its own. With an album carrying two nights in a row makes it possible to compare Pauls stage rants and the bands energy flow. We also get live versions of tracks such as Bang Bang You and Reason To Live. Two tracks from the new album that never got performed again live again after this tour. Kulick said: My goal with the band was always to play well, he explained. I can’t compete with Gene [Simmons] and Paul [Stanley] in terms of running around and play well. There were a lot of liberties with Paul performing and singing, he had a lot of fun being an incredible showman. That means, to me, that we’re a trio, and I better be playing my shit right, which means I’m not going to be running around the stage, my hands are going to be more tethered to my guitar.