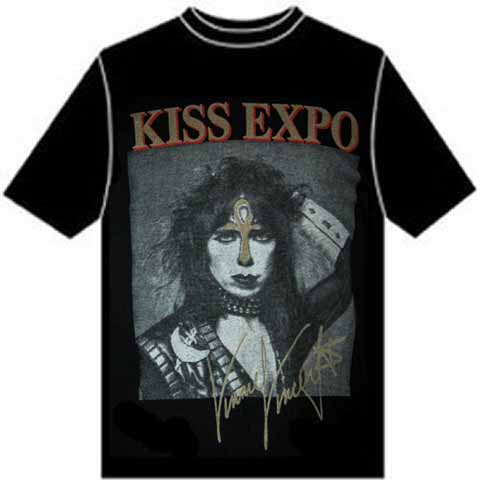 On August 9th, 1995, Kiss joined the long line of musicians to perform on MTV Unplugged. The band contacted Criss and Frehley and invited them to participate in the event. The Unplugged appearance set off months of speculation that a possible reunion of the original Kiss line-up was in the works. Then on the 28th of February 1996, Tupac Shakur introduced the original Kiss line-up, in full makeup and Love Gun-era stage outfits, to a rousing ovation at the 38th Annual Grammy Awards. This was the first time the original four had been in full make-up on a stage since 1979. This started up a real Kiss fever again and the annual Kiss expos that was booked for March and April of 1996 could have been a massive success. The special guest for the 1996 expos tour was none other than Vinnie Vincent, who were suppose to do a Q&A session, signing autographs, taking photos and performing a few songs with the cover band. The first expo was held in Atlanta on March 24 where Vinnie were selling his The EP mini cd (later pressing is called Euphoria). One show was done in Usa before the Expo went over to Europe for 15 booked appearances. This Expo tour however would turn out to be a real nightmare for the promoters. Vinnie only wanted to give out an autograph if you bought a cd, he refused to take photos and after a few dates he even refused to appear on stage with the cover act and he also were several hours late at all shows. After 10 dates he didn’t bother to turn up at the Hanau show. Instead he sent a fax that he had left to the US and resigned from the tour. This official shirt was sold at those Expo dates. Since the 5 last dates had to be cancelled the shirt became an even bigger rarity. So if you want to have an official Kiss shirt with Vinnie Vincent on it, then this is your chance. 100% cotton and made in Usa this is a badass vintage Kiss shirt for any Vincent lover out there and a cool memorabilia in any Kiss collection

This one has never been used. Just bought and stored for the last 25 years