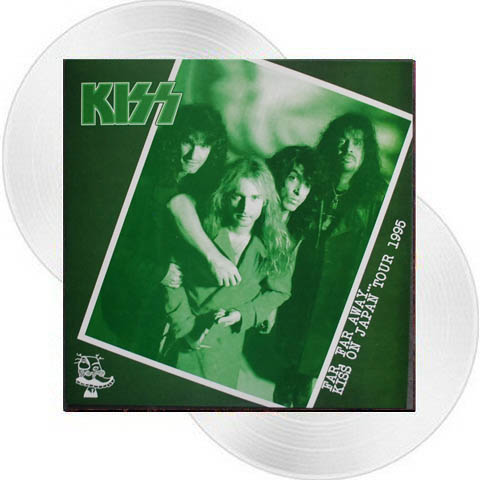 During late 1994 Kiss planned one of the smallest tours of their career with a visit to Japan and Australia scheduled for the early part of 1995. The Japanese leg of this Worldwide 1995–6 Tour saw the band play five shows in a week. This tour started off at Osaka’s Castle Hall on January 24 and was followed by shows in Kyshu (26) and Nagoya (28) before culminating with two shows at Tokyo’s Budokan on the 30 and 31st. While the shows were an extension of the format that had developed out of the rare live performances of 1993 and 1994, they musically broke little new ground. The band used a set that was similar to one which had last been seen on the Animalize tour. It may well have simply been a matter of it being cheaper to ship, and less complex to deal with, than the Liberty or Leon stages that remained in storage. As was the norm for the period the set lists remained extensive retaining the material blend that favored the older songs in the catalog. The first night of the tour saw just over half of those who had purchased tickets for the show turn up, leaving the hall looking rather unfilled. On their first visit to Japan since 1988, the band was keen to play with full energy for the loyal fans and Paul continued to develop his rapport in Japanese with the fans. The final two nights at Budokan differed little from the rest of the tour with the exception that on both nights Unholy was left out of the set list to allow Gene to rest his voice. Apparently, Gene had been developing voice problems during the tour, which resulted in Paul helping him a lot on several of his main vocal songs. On the day of the final show, January 31, Bruce conducted a guitar clinic for ESP at Allinos Hall in Tokyo that culminated with a jam session with some of the attendees. The visit to Japan occurred at an emotional time for the country. On January 17, 1995, before the band had even arrived in Japan, a powerful 6.9 magnitude earthquake struck Awaji Island, across the bay from Osaka. This quake caused extensive damage and loss of life. As KISS would later do with other areas recovering from disasters, during the final show, “Paul announced they had set up a phone number to help the people in the Kobe area who suffered from the earthquake. When calling the number one automatically makes a donation hearing a message from Paul and a version of ‘Strutter’ recorded during the sound check for Budokan. With this KISS raised 10,000 dollars! Paul’s message also stated that ‘Rock Bottom’ was to be heard, but it was not included. ‘Rock Bottom’ was in fact recorded at the sound check” (Rene Barneveld, Strike #36). Both of these songs were recorded on January 30, 1995 while the final show was professionally filmed. Paul’s phone message was succinct: “Hi, this is Paul Stanley. Thanks for calling in to the phone line. You’re making a contribution just by doing this. And obviously this is a way to help all our friends in Japan, but it’s also more importantly it’s a way for you to help your people. So, hope you enjoy the music and thanks for calling.” The recording of “Strutter” was followed by a formal thank-you in Japanese by a woman. The cost of the call was ¥300.