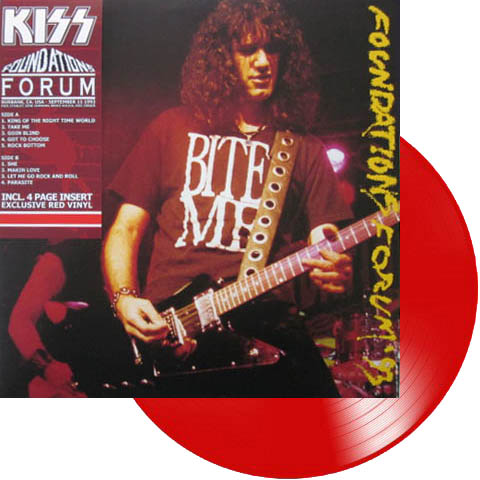 This album is from the Foundations Forum in Burbank from the 11th of September 1993. The recording is a good but thin stealth styled audience recording that sounds like it was recorded through a drainage pipe but thankfully all the music and vocals are clear and after your ears adjust the explosive performance can really be enjoyed. What makes the recording special is the set list, the band dug way deep and play songs they had not played for some time. King Of The Night Time World and Take Me are good but from here on out the set list is phenomenal. Beginning with the Hotter Than Hell classic Going Blind, Paul tells the audience that it has not been performed live, they would play it acoustically on MTV later in the year and of course it would be played during their convention tour the next year. The song hits on all marks and the band play an incredible version of the song. It starts flowing from here as the band play Got To Choose, obviously the vibes from Argentina were great and the band leave it in the set. Paul tells the audience what a treat it is for them to playing this gig as they do not play such deep tracks regularly; thankfully someone is recording the event for posterity. Bruce Kulick does his best Ace imitation for a white hot Rock Bottom and I am blessed with a heavy version of She, one of my most favourite Kiss songs. Let Me Go, Rock And Roll is great to hear as it had not been in a regular rotation for some time and Parasite finishes the extremely strong set. Perhaps the band could see that their future was actually to be seen by looking into their past.