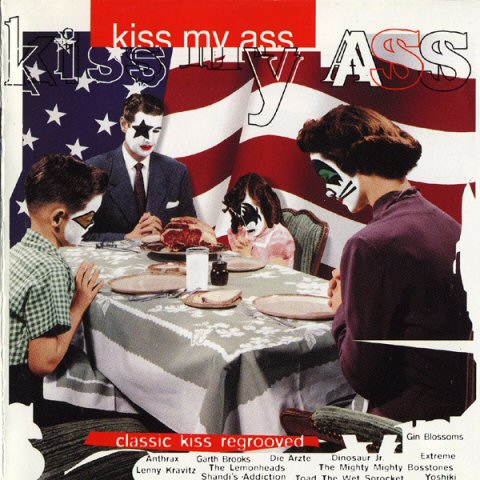 Kiss My Ass: Classic Kiss Regrooved was released in 1994 to generally mixed reviews. Though it went gold, the album appealed neither to die-hard Kiss fans nor to pop radio listeners. “Detroit Rock City” as performed by the Mighty Mighty Bosstones was the first song released as a single. But it was “Hard Luck Woman” by Garth Brooks that is generally considered the most popular from the set. It is also the only track where Kiss actually performs as the backing band. Lenny Kravitz produced the most interesting reinterpretation by dueting with Stevie Wonder on the song “Deuce.” The Gin Blossoms’ version of “Christine Sixteen” was by far the most faithful on the album. But Toad the Wet Sprocket provided the most daring cover with their slowed-down version of “Rock And Roll All Night.” Most fans did not like the drastic redo. But its biggest fan was Gene Simmons himself: “I give that an absolute ‘A’ just for balls-to-the-wall bravery. Because when a song winds up so ingrained as a style, for somebody to completely disregard that and say, ‘No, that’s not important – I’m gonna do it my way,’ is really what it’s all about. To me, Toad’s version is every bit as relevant as everyone else’s, ours included.” This album almost developed into something totally different. When Simmons was first discussing this album, he mentioned quite a few bands that never made it onto the final version due to legal entanglements; these artists included Mozart, Dramarama, the Melvins, Nine Inch Nails, Stone Temple Pilots, Alice in Chains, Kurt Cobain, Thurston Moore, and Ozzy Osbourne. Kiss My Ass: Classic Kiss Regrooved was also first envisioned as a double album with one disc of cover versions and a second disc of original Kiss recordings. Though this version never materialized, a Japanese promo version (Kiss My Ass: Classic Kiss Regrooved [Japan Promo]) comes close. Overall, this is an interesting concept album probably more popular with fans of the individual bands participating in this project than with Kiss fans. The album peaked at number 19 on the Billboard charts and remained there for 13 weeks.