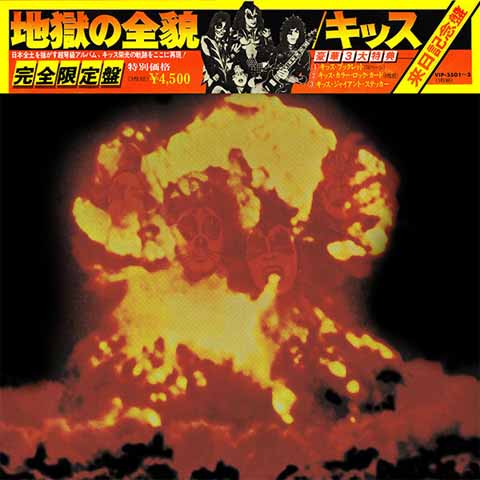 All vinyls and booklets are in good condition while the cover has some scuffs in corners and on the spine as well as bent marks. No trading cards or sticker

The Originals is one of the most popular collectibles in the KISS catalogue, and one of only a few releases limited to only a few countries. ‘The Originals’ features the three first album in a special repackaging. This was released in hopes of boosting sales of the back catalog at a time when ‘Destroyer’ had become the first studio album to be certified Gold by the RIAA (Recording Industry Association of America). Basically, it was an attempt to build on the rising exposure and popularity that the band had gained as a result of the success of ‘Alive!’ Because of the release date pre-dating the success of ‘Beth’, the album set is more tied to the success of ‘Alive!’ than ‘Destroyer’. ‘The Originals’ was released in Canada, Japan and Usa and the format of release seems to have been pretty standard between the three countries where it was issued, with only the size of the retaining sheets (the flaps which hold the contents in either side of the gatefold sleeve) differing. Only the Canadian release came as a proper gatefold with the band logo printed repetitiously on the inner cover, while in both Japan and the United States used more of a folder-style construction, with the folder restraints differing in size. The cover of the album is a gatefold, naturally, and the three records are housed in paper sleeves featuring the artwork of the respective album that they contain. All versions of ‘The Originals’ include the History Booklet, a 16-page illustrated history of the band up to 1976, which is printed in sepia-style monochrome on 12″x12″ paper with a glossy cover, a large color KISS Army sticker, and a sheet of 6 trading cards which originally had to be separated by the purchaser. With the trading cards, another difference is evident: The US versions of the trading cards came pre-perforated, meaning that they could easily be separated, while the Japanese version had scissors track marks printed on the guide sheet for the trusted fan to cut the cards for themselves. Wonderful cultural differences with the American fans perhaps not being trusted with scissors, even before the age of litigation! In addition to those standard premiums, shared with the US and Canadian versions, the Japanese release includes a Japanese language, eight-page lyric booklet with biography of the band. The Japanese version was released on March 25, 1977, some eight months after the release of the North American versions in conjunction with KISS ‘Sneak Attack’ tour of Japan.