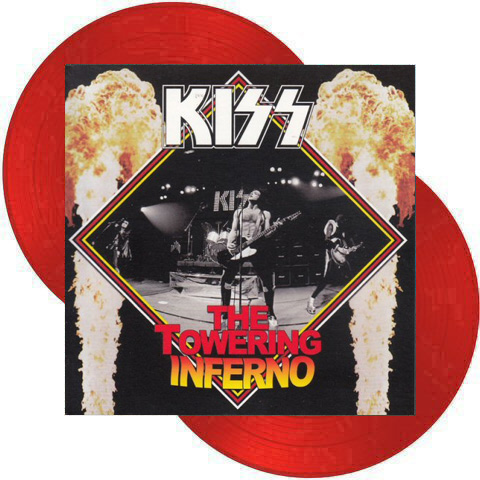 Kiss rise to fame was due to a couple things, great songs and a unique look were certainly key parts of it, yet it was their live show that would lay the foundation for a career that has spanned four decades. Loved by fans and feared by headliners, the band would get their first gold record within two years with Alive!, an album that would bring Kiss to the edge of rock stardom. It sold well from the beginning and was a key factor in saving their record label, Casablanca, from financial ruin. Yet after the release of this iconic record, the band did what they have always done, went on tour. The tour would run from early September 75 to March 1976 and one looking at the excellent Kiss Alive Forever book, it started in smaller halls and theaters and ended in larger arenas and the Alive! record continued its rise on the charts, their attendance went up as well. There are just a handful of live tapes from this tour so this release is very much welcome as it contains a show from very early on, the seventh stop of the tour in the City of Brotherly Love, Philadelphia, 3rd of October 1975. The Tower Theatre is an iconic venue for Rock fans, an intimate venue with a 3,000 capacity that has presented legendary shows by David Bowie, Genesis and Bruce Springsteen to name a few. This Kiss recording is unique, first off the sound is very good bordering on excellent, clear and well defined and like many tapes from the era favours the middle and upper frequencies, push play and turn this up for maximum enjoyment. The set list is standard for this time, all the iconic Alive! tunes are here, the opening salvo of Deuce and Strutter is one of the greatest duos in rock, what better way to get the crowd into the show. I love Got To Choose, the Hotter Than Hell track is a classic and it had to have been recorded for Alive, wonder why it was discarded, it’s sad that because of the studio work done on the record, we will never hear the source tapes from the dates recorded for the record. Paul greats Philly official and tells if they can “party hearty” that they can get the place….Hotter Than Hell. As typical the song segues into Firehouse, again another reason to guess the recorders position as during the song ending where the sirens is blaring, you can here it panning like it was going from side to side. The sound during this part of the concert is excellent, Peter’s playing and drum sound is incredible. Gad damn I love She, perhaps my favorite of early Kiss songs, as I listen to this version it captures the band in complete synchronization as they out the riffs of the song and Peter is playing to just perfection, he was so good and for me, is the shining star of the this tape, indeed, sorry Ace your solo was great but Peter trumps it! Nothin’ To Lose is great, again Peter is on and you can feel it as soon as he starts singing, even throws a “shake it one time for Pete” for good measure. C’Mon And Love Me is pure cock sure swagger by Paul, Ace nails the leads, his playing is flawless. 100,000 Years is right up there with She, love the riff but first we get Gene’s solo, the audience eats up the blood spitting routine and the song also features a great Peter solo as usual. Paul’s does his believe in Rock and Roll rap, the sounds changes a bit like the taper had to move around a bit after Paul gave the “stand up for what you believe in” line. Black Diamond is the culmination of the set, the beginning suffers from feedback and Peter’s mic does not work, if you listen closely you can here him singing, Paul takes over with “though you don’t ask for pity” yet while the equipment malfunctions hamper the first half, the latter half with a superb Ace solo brings the song to a bombastic close leaving the audience screaming for Kiss, when Paul reappears and asks if they want more it brings the place down. His microphone has gone to hell but he does the Cold Gin rap and the audience response is one of THE best I have ever heard, they are seriously amped up! The fervour does not go away, the band return for Rock And Roll All Nite, and it’s party time, during the song the band had confetti guns to shoot over the audience, apparently during the song one malfunctioned, flew off the PA stack and hit a girl in the head. KISS Krewman JR Smalling jumped into the audience and took her backstage for medical attention and in true rock and roll spirit, never tried to get compensation from the band. A rollicking Let Me Go, Rock And Roll ends the triumphant performance, the audience clamour for more but the show is over yet the recording keeps going and you hear almost what sounds like the end of Rush’s All The Worlds A Stage. Kiss would return to Philly at tours end and would play to 11,000 fans as word continued to spread and the band’s infamy grew into fame.