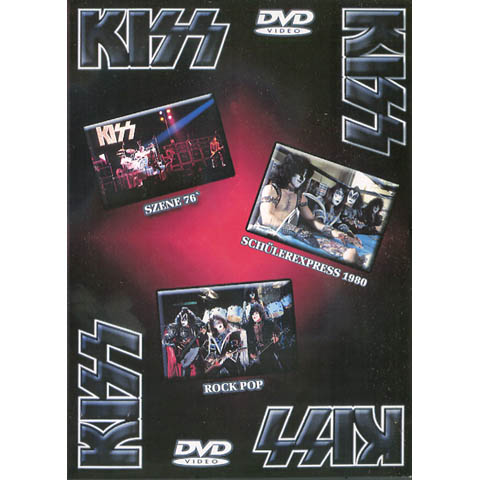 A compilation dvd featuring the TV appearances Kiss made for Germany TV during the 70s and 80s. First out is material from a local TV show Szene from 1976. Kiss had released the album Destroyer in March of 1976 and started their famous Spirit Of 76 tour in April the same year. The performed shows in Europe in May to early June and during these shows the band were still wearing the Alive costumes instead of the classic Destroyer costumes, thath would be unvelied on the opening night of the second leg of the US tour starting 3rd of July. 5 shows were booked in Germany with Scorpions acting as opening act. When the band was hitting the last shows on the tour, a local TV team headed out to the Circus Krone in Munich on the 3rd of June, only two more shows in Europe would be played after this night, to set up and interview. The interview were in English then narrated into Deutsch. The cool thing is that the TV team also taped when the band performed Detroit Rock City that night. Its such a cool version as Paul is singing the track brilliantly, more in style with the album version than all later live versions. Out next is material from the 1980 Unmasked tour with Iron Maiden as support act. Believe it or not but in 1980 Kiss were at the height of their career in Germany. I Was Made For Loving You was a huge hit in Germany and the band had 9 dates booked for May of 1980 during their Dynasty tour. However the tour had to be cancelled as Peter Criss left. Before the band were able to return to Germany they released the album Unmasked, and releasing more successful singles in Germany. When the band returned in September of 1980 they had expanded the tour to 12 dates in Germany, the tour was sponsored by the German youth magazine Bravo. The material here was for a show called Schuler Express, a regular series for young people broadcast on ZDF. One episode lasted 30 minutes, including the Kiss special, which was broadcast on November 7, 1980. It was basically the story of Jutta, who is a big Kiss fan and wants to go to the Kiss concert, while her friend Roland is against Kiss. There were also a lot of scenes with Kiss to see, about half of this episode was Kiss, the other half was the story with Jutta and Roland. In addition to some live excerpts from a Kiss concert, there is also a backstage interview with German subtitles with all members of the band. Gene stuck out his tongue during the interview and then asked for $ 5 (jokingly, of course) and said that he was a horror fan. With champagne glass in hand, Ace slurrs that he might look a bit unsteady as he’s not familiar with the gravity on earth (he also went to the stage with champagne glass in hand). Eric said he was the fox and Paul explained what the Kiss Army was and what it was there for. There are also scenes from the autograph session that Kiss gave in Frankfurt on September 16 on Main Radio. You can see how the band, protected by a police escort from a raging crowd, gets out of the cars and goes into the shop for the autograph session and there signs all kinds of things for the fans. The organizer is also briefly interviewed and briefly explains the daily routine of the crew and some details about the tour, including numbers of how much it costs for an organizer to book Kiss. Last we have material from the famous Rock Pop show, where Kiss did a playback performance of She’s So European and Talk To Me. Paul Stanley also played the star guitar, which he never used in live performances. It was first broadcast on September 13, 1980 on ZDF.