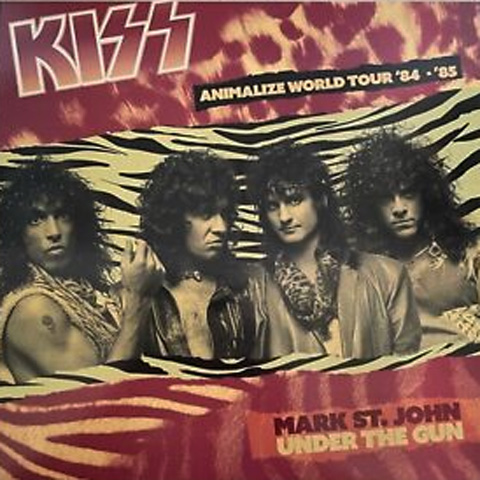 This album from Broome County Veterans Memorial Arena in Binghamton, New York (29th of November 1984) is a real treat as it features Mark St Johns third and final performance with Kiss. Here comes a local review from the Press And Sun-Bulletin the day after: Heavy metal monsters Kiss brought their brand of rock ‘n’ roll into the Broome County Veterans Memorial Arena last night, but left behind most of the theatrics and fireworks that have won them their following over the past decade. The audience, which only half filled the Arena, must have left something behind also, because their response to Kiss 90-minute set was relatively reserved in comparison to recent heavy metal shows here. Perhaps it was the atrocious sound that stifled the crowd’s enthusiasm. From the first number, it was uncomfortably noticeable that something was wrong with the mix. The top of drummer Eric Carr’s kit sounded tinny, while the bass drum was boosted all out of proportion with the rest of the band. The band’s sound system showed signs of having taken a terrible beating on the tour. When the guitars were cranked up too loud, the speakers distorted the music, then gave off a horrible buzz between numbers. Kiss shrugged and carried on, and in the first part of the set they showed off some pretty good chops and funny, if clichéd self-depreciating humor. Conspicuously absent were the explosions, fire-eating, and tongue-waving that seemed indispensible Kiss staples in past years… Paul Stanley smashed a cheap guitar and tossed it into the audience. Looking on, bassist Gene Simmons, who was rather sedate all night, tripped over his boot heels and nearly plunged off his perch atop some speakers. A couple of band members were laughing so hard at him that they nearly stopped playing