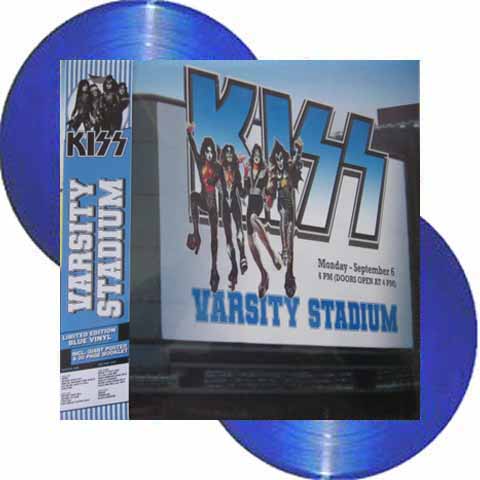 The tour to support the Destroyer record, released in March 1975, consisted of two legs. The first a few warm up dates in America followed by a Canadian jaunt that led to their first ever European tour. The band was still using their Alive! staging, costumes, and a set list that included just a few new songs, thankfully one of them was Flaming Youth. After the tour was over in early June the band made preparations to do a proper tour that would feature new staging and costumes similar to what was on the Destroyer record cover. The second leg began in early July and would boast an impressive bill of Kiss in the headlining spot and the up and coming Bob Segar and the Silver Bullet Band were openers for much of the tour. There would be several stadium shows on the tour, one of these dates is featured here, an impressive soundboard recording from the band’s gig in Toronto at the Varsity Stadium, on the 6th of September 1976, a venue that could hold a capacity of 30,000 that during the 1976 Summer Olympics would host several soccer games. This soundboard recording is a bare bones one, the crowd is so low in the mix it sounds like the band is playing an empty stadium. The band’s performance will suck you in. This show was recorded towards the end of the tour and the band is in incredible shape and delivers a tight and blistering performance. Detroit Rock City and King Of The Night Time World are the openers, like on the Destroyer record, the two go hand in hand and are perfect for setting the pace. The pace does not slow in fact it quickens with a rollicking version of Let Me Go, Rock And Roll, that’s what I love about this era of KISS, they hit you with an assault of both music and the visual and did not really have long raps, those would come in subsequent years. Strutter is for “all the girls out there”, the song played such an important part in the bands early set list and would be dropped, like many of the older songs, after this tour. Hotter Than Hell would be linked with Nothing To Lose and kind of lessens the impact since Firehouse would be played late in the set, although the later features great vocals by Peter, not to mention his drumming! Ace gets his solo spot during Cold Gin, he goes through all the motions, after he does all the theatrics he rips into a great blistering flurry of leads that will blast you into the stratosphere. After the oldies part of the show is done the band gets into more new music that begins with Shout It Out Loud, this version is almost a perfect replica of the official version. Do You Love Me? is perhaps my favorite song from Destroyer save for the one that follows. Great song that seems to be at odds lyrically with much of the bands other song topics but seems to make more sense so to speak with their ever growing popularity, the songs use of harmonies is also very effective. The last of the new Destroyer tunes is next, it begins with Gene conjuring up the Demon from the bowels of hell, it must be making an impact because you can actually hear the audience respond, once the band breaks into the song it just wreaks of badassness yet with a killer groove. The song takes the place of the equally as great 100,000 Years for both Gene’s and Peter’s solos, while Gene’s solo is a visual thing, Peter’s is pure talent and a joy to listen too, his use of a large gong is a most effective way to bring it to a close. The main set ends with a high energy version of Rock And Roll All Nite, the song is incomplete and cuts at the 2:46 mark and the beginning of Deuce is also cut missing the first 35 seconds. Deuce is a kick ass version, extremely high energy like the band is trying to Destroy all 11,000 in attendance. Paul’s intro to Firehouse has him giving Toronto a bit of love before his “get this place hot” rap and like Deuce the band does not let up but it is the show closing finale of Black Diamond that brings the concert to its dramatic end, I wonder if someone threw something at Paul as he is clearly audible calling someone an asshole during the songs quiet opening. This show is another in a long string of triumphs that was certainly making KISS, the hottest band in the world.