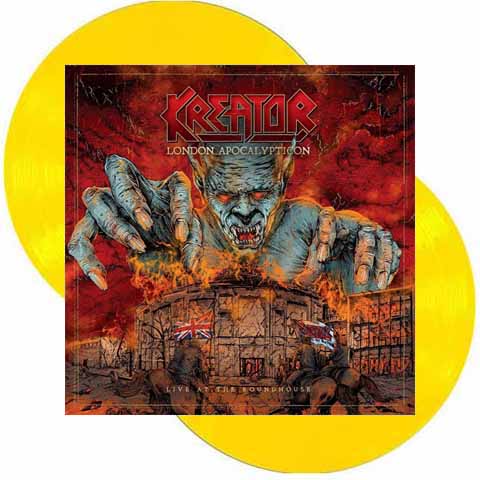 Keep the flag of hate flying high: Thrash legionaries Kreator have just closed the most successful cycle of their entire career. For a band entering its 38th year, that’s outright remarkable. Above all else, though, it’s rare. Bloody rare. The hunger, the fury, the lust for noise – everyone who came out to see Kreator live since they released their thundering Gods Of Violence knows about the Thrash apocalypse Mille and his crew brought upon stages around the globe. It’s only coherent to end this historic cycle with an equally fierce live release. Enter London Apocalypticon – Live At The Roundhouse, capturing the demolition-hammer-like show at London’s revered The Roundhouse on December 16th, 2018 – as raw, as loud, as infernally direct as only a Kreator show can be. It’s no coincidence that the band picked London as the epicentre of their furious new live release. There, on the shores of the Thames, did their bring their triumphant march of Gods Of Violence to a grand finale after more than 150 shows on five continents. From early thrash classics like Pleasure To Kill and People Of The Lie to the more contemporary burners like Enemy Of God and Satan Is Real, this is the best ever Kreator live release