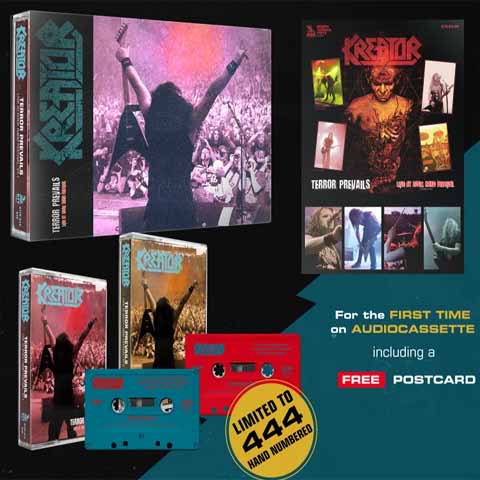 Terror Prevails is quite different from Kreator’s prior live offering Live Kreation, because where that was drawn from a number of performances to get the best sounding versions of each song on the track list, this is all recorded from a single set at the Rock Hard Festival May 2010 at the Gelsenkirchen Amphitheater. It has an excellent sound quality and in fact I much prefer it to Live Kreation when all is said and done. Mille and crew manage to capture an amazing energy which spans a number of their “hits”. It opens with “Choir Of The Damned/The Pestilence” and it sounds as fresh as if it had been recorded for one of their recent studio albums! Petrozza does sound a little fainter than his usual bark, but it works really well, and the guitars are absolutely perfect. After this the band breaks into more modern territory with “Hordes Of Chaos” from their new album at the time, “Phobia” from Outcast, and then the knockout combo of “Enemy Of God” and “Impossible Brutality” from Enemy Of God, all of which likewise sound superb and get the crowd going apeshit hogwild insane. Then the band runs through classic after classic, just listen to this track list “Endless Pain”, “Pleasure To Kill”, “Terrible Certainty”, “Extreme Aggressions” and “Coma Of Souls” all of which honor their original incarnations with pride. More songs follow before the set finish with “Flag Of Hate” and “Tormentor”. Destructions live epic “Live Without Sense” had an amazing clean sound but when it comes to German thrash metal then i would probably rank this live offering as high. Its ripping with clean and powerful tones, nice atmosphere and a good sense for the crowd reaction, not to mention the incredibly professional performances of the individual line-up, even if we have to listen to Mille shout ‘mosh pit’ in his German accent numerous times. So if you find this hard to find recording then get your hands on it