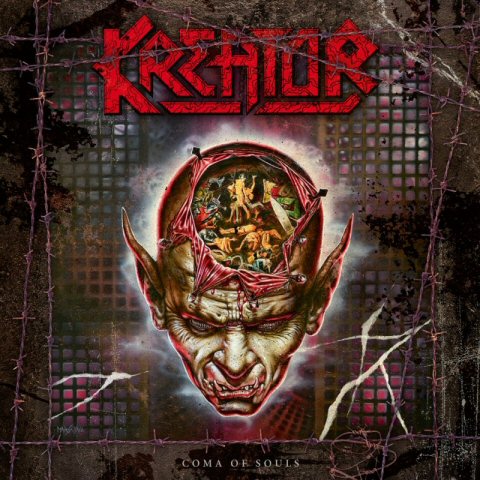 2018 re-issue on triple album on red vinyls with a bonus live concert, gatefold cover including sleeve notes from Mille

Although they remained largely without peer when it came to pure Germanic thrash metal, by the time of 1990’s Coma of Souls, Kreator’s very successful formula had begun to grow a little tired. The fact that they were coming off perhaps their biggest album yet in 1989’s Extreme Aggression didn’t help matters, and despite its overwhelmingly solid songwriting, Coma of Souls still sounded somewhat repetitive to all but the most unquestioning of fans. Still, better too much of a good thing than nothing at all, and with their head-spinning musicianship and well-chosen stabs at melody, complex moshers like “When the Sun Burns Red,” “Angels of Brutality,” and the title song are guaranteed to thrill lovers of technically proficient thrash. Two tracks in particular stand out of the pack, namely the outstanding “People of the Lie,” whose chorus is almost too groovy and memorable to be called thrash metal, and the expertly executed “Terror Zone,” with its unnaturally measured pace and a melodic intro to die for. Also of note, the band hardly skips a beat with the arrival of former Sodom guitarist Frank “Blackfire” Gosdzik, who establishes an instant chemistry with vocalist and fellow six-stringer Mille Petrozza from the start, as they proceed to exchange lead after stinging lead like machine-gun fire.