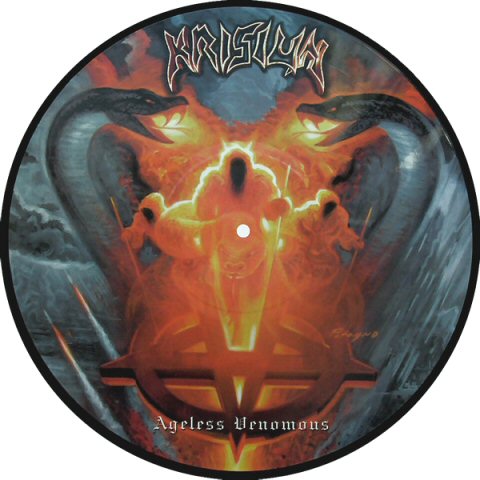 With their fourth album, Brazil’s Krisiun offers up more of their patented high-speed death metal brutality. The insanely fast drumming, technically demanding guitar riffs, and meltdown-evoking solos are still in full force, and if anything, the band has even managed to up the overall extremity level with this album, at least in terms of their playing. Especially notable are the two instrumentals, “Serpents Spectres,” with its demonically possessed neo-classical-meets-death metal guitar shredding, and “Diableros,” a brief acoustic guitar/percussion piece that literally sounds like a flamenco traditional played at 78 rpm. However, despite the faultless performances, the polished, sterile sound quality keeps this album from being all that it could have been. The bass drum tone is specifically problematic: It’s brittle and artificial-sounding, almost like a drum machine. Considering that the bass drums are constantly in action, this seemingly minor flaw becomes heavily magnified over the course of the album. Krisiun’s music is savage and aggressive, but Ageless Venemous comes across as tame relative to their other work. More timid listeners might find this album to be a good introduction to the band, but those seeking the real deal should start with their previous album, Conquerors of Armageddon.