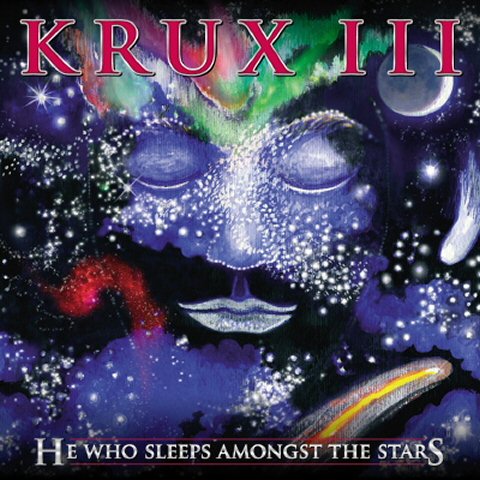 Krux -III: He Who Sleeps Amongst The Stars cd

Krux III He Who Sleeps Amongst The Stars is the last part of a colossal trilogy that began with the critically acclaimed Krux (2002) and Krux II (2006). Krux takes the listener on an epic metal journey that starts with the spine chilling title track, and ends with the 12 minute tale of Prince Azaar And The Invisible Pagoda. Great stuff! In between we get to know The Hades Assemblyï, a group of men that want to rule the earth together with the guy downstairs. Small Deadly Curse is a sinister little piece about missing somebody so much you end up hating your loved one instead. And Emily Payne is the lovely girl that disappears into a black maze! Heavy, dark, evil with some haunting keyboards delivered by Carl Westholm (Carptree, Jupiter Society). Peter Stjarnvinds (Nifelheim, ex Entombed) drumming is also worth mentioning. For all of you that dont know Krux we can tell you that they consist of some pretty well known names and faces! Mats Leven (Firewind, ex Yngwie Malmsteen) gives us some great vocals and check out the deadly double axe work by Jorgen Sandstrom (Vicious Art, Torture Division, ex Entombed) and Fredrik Akesson (Opeth). We talk about metal here! And speaking about the latter…Fredrik plays some incredible solos on Krux III! If you wanna know exactly how fast, mean and tasteful a solo can be…just listen to the title track! Krux III He Who Sleeps Amongst The Stars is a formidable metal feast for everyone into doom, heavy, epic and powerful music. Candlemass songwriter Leif Edling is behind six of the seven songs on this album. Honey And Bees was co-written with Jorgen, and has a sweet end solo played by no one else than Bruce Franklin from Trouble! Krux III He Who Sleeps Amongst The Stars is the sound of a metal catepillar dropping a dumpster on your doorstep!!

Track list:
1. He Who Sleeps Amongst The Stars
2. The Hades Assembly
3. Emily Payne (And The Black Maze)
4. Small Deadly Curses
5. Prince Azaar And The Invisible Pagoda
6. The Death Farm
7. A Place Of Crows