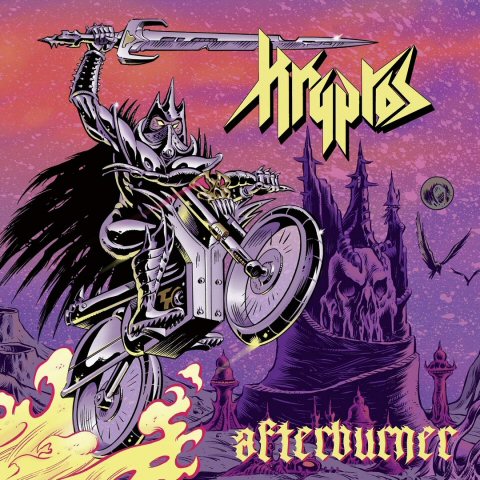 Since 1998, when Kryptos was formed in Bangalore, India the three-piece is a synonym for hotshot old school heavy metal with a thrashing twist. As the first Indian band ever touring Europe they earned themselves a reputation as a fiery and exciting live act, which they consolidate with their performance at the Wacken Open Air in 2013, once more as the leadoff band beyond the Indian ocean and supporting Death Angel, Testament or Iron Maiden. So, what could be more obvious in 2019, due the band´s twenty-year anniversary, than that the spearhead of the Indian Metal Revolution release their ferocious fifth album Afterburner, featuring razor sharp riffs, screaming solos and a raging twin guitar attack, proudly following the best traditions, flooring the gas pedal and putting Indian Metal on the map once and for all?! As with the previous albums Anupam Roy again is responsible for mix and mastering, for the cover design Kryptos could win Bill Hauser, who also designed the crazy artworks of Hirax and Skeletonwitch. With this album the band really have upped their game and the end result is an absolute classic. If you’re a fan of old school thrash then it’s a must purchase as there’s not a single weak track on the album.