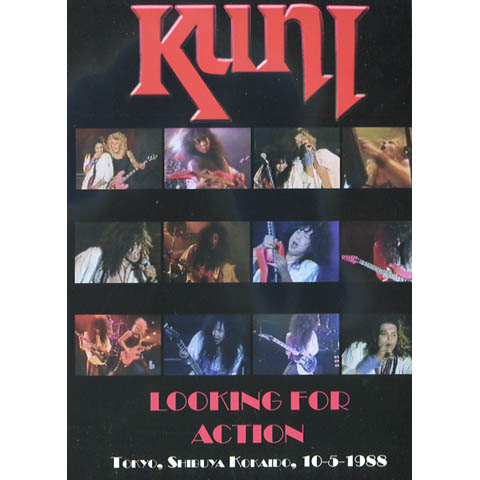 Kuni Takeuchi is a left-handed Japanese guitar hero that released his debut album back in 1986. That debut album featured a host of American Metal talent with ex-Anthrax vocalist Neil Turbin, Quiet Riots singer Kevin Dubrow, bassist Chuck Wright and drummer Frankie Banali, Steeler drummer Mark Edwards, Talas bassist Billy Sheehan and Tytan/Lion vocalist Kal Swan. The 1988 follow up Lookin For Action was recorded in the Spring of 1987 and featured vocals from the singer extraordinaire Jeff Scott Soto and drums were handled by another major talent namely Mike Terrana (Axel Rudi Pell, Rage, Tarja etc). When the band toured for the Lookin For Action it was with the line-up of:

And this dvd was recorded at the Shibuya Kokaido Hall in Tokyo on the 10th of May 1988 and its an impressive show. Kuni’s guitar work is of course great to hear and see but Kuni himself was never the one that needed to take the center stage. He never took the masturbatory ego-maniacal approach to his music like certain other virtuoso’s does, instead he wanted to genuinely perform songs with other top notch musicians and with this line-up he surely succeeded. This is a great show full of brilliant melodic heavy metal with a sound similar somewhat to Dokken or to a lesser extent Crystal Roxx. Kuni of course displays endless talent of technical, and very much heavy metal style play, that manages to couple brilliantly, with a slightly more commercial, and very melodic style of music. My favorite Japanese heavy metal outfit, right here. Do yourself a favor and pick it up.