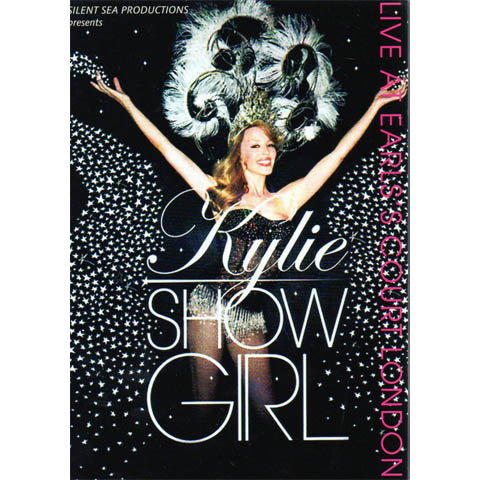 The statistics for Kylie Minogue’s Showgirl Greatest Hits Tour make eyebrow-raising reading. The tour, which opened in Glasgow would keep Kylie in England for 23 nights at four venues across Britain then it was over to Europe, Australia and the Far East before returning back to England again for the Glastonbury festival. The show was costing £5m to stage and used 100 people. Fifteen trucks were needed to ferry the whole lot about. Most bizarrely, one of them was employed just to shift the artist’s feathers. Yes, feathers, so many of them that this could well be the first pop tour to prompt the interest of the Royal Society For The Protection Of Birds. The befeathered Ms Minogue wears plumage and a tail and is carried aloft by near-naked male dancers wearing 8ft (2.4 metre) feather wings…puh. But at the centre of this fluff-meets-art visual extravaganza is Kylie’s new persona: part-Gloria Swanson, part-Cleopatra and disco girl. At 37, she still looks like the girl who got up for the school play and walked out on to the world’s stage, which is, of course, the master stroke of Minogue’s career. Despite two decades at the top, Minogue gives the impression of being vulnerable. Her fans still cheer her on like a nag at the National. Go Kylie. Former Neighbour Charlene the girl next door. And yet, analysis of her career shows how preposterous this is. She has been strong enough to make the leap from soap opera to pop before it became everyday, to rebel against her early svengalis Stock, Aitken and Waterman and overcome mistakes like the disastrous dalliance with the sweaty punk types the Manic Street Preachers. Here, the enormous costumes play upon her tiny size, paradoxically making her dominate the stage, resemble an enormous ostrich and yet look more fragile than ever. That’s courtesy of the tour’s most unfeasible statistic – a 16-inch corset. The widely-discussed waist crammer underlines the lengths (or widths) Minogue will go for her art, but this tour is all Show at the expense of the Girl. Her voice – never her strongest asset – sounds octaves higher. She never once stops smiling, which may hide first night nerves or what it actually feels like to wear a 16-inch corset. It’s not quite an epic folly akin to Elizabeth Taylor in Cleopatra, but an overlong greatest hits set demonstrates the genuinely great singles in Minogue’s long career. Slow And Spinning Around sound fabulous. Dreams (Impossible Princess), Je Ne Sais Pas Pourquoi are there as well as her version of Somewhere Over The Rainbow, delivered atop a flying half moon, or an excruciating Parisian remake of The Locomotion. Perhaps deep down Kylie always wanted to be Judy Garland and Madonna, but while Madonna’s last tour saw dancing mullahs and hinted at political implications, this one has luminous balls and images of frying eggs. She’s on safest ground revisiting the seaside postcard fun of 2001’s Camp Kylie tour to bash out sweet nothings over an enormous disco beat. I Believe In You and Can’t Get You Out Of My Head kick off a giant office party. Alas, Kylie spoils it all by exhuming Especially For You, with the crowd singing Jason Donovan’s parts. The Showgirl Tour was a larger than life experience for Mrs Minogue. This dvd captures the girl in action at the Earls Court in London on the 6th of May 2005.