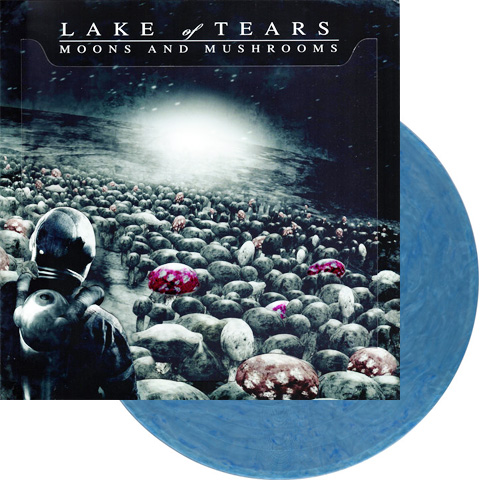 Lake Of Tears have gone from strength to strength, each release adding something to their sound, yet always retaining their beautiful sense of melody and the heartfelt vocals of Daniel Brennare. Lake of Tears imbue their music with something that is terribly lacking in today’s by-the-numbers bands. Soul. Take the sombre yet hopeful “Like a Leaf” for example, or “Waiting Counting”, with its subtle nods to The Gathering’s mid era keyboards. Every song sounds ever so slightly nostalgic, brushing with seventies aesthetics reformulated and filtered through the nineties and the new millennium. This is no hard rock trying to be metal with atmosphere sort of thing. The band has evolved from its early doom years to something that is rather hard to categorise. ‘Moons And Mushrooms’ sounds like a cross between ‘Forever Autumn’ and ‘A Crimson Cosmos’, taking the emotional depth of the former and the groovy elements of the latter, with a bit of the harsher guitar introduced in ‘Black Brick Road’ — at times slow and pondering, and elsewhere faster and sharper. Closer ‘Planet Of The Penguins’ leans heavier on doom influences, with a long drawn and captivating solo that fits perfectly as a parting bookmark.

Track list:
1. Last Purple Sky
2. You Better Breathe While Theres Still Time
3. Waiting Counting
4. Like A Leaf
5. Children Of The Grey
6. Head One Phantom
7. Island Earth
8. Planet Of The Penguins
9. Is There A Better Way-Status Quo cover