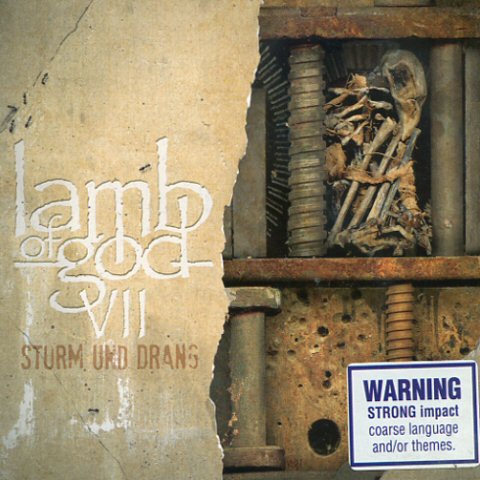 The seventh studio album (eighth if you count the groups 1999 debut under the Burn The Priest moniker), Sturm Und Drang arrives at the end of a tumultuous three-year period for the veteran metal outfit that saw frontman Randy Blythe arrested, imprisoned, and ultimately exonerated for charges stemming from the onstage death of a fan at a 2010 Lamb of God show in the Czech Republic. The financial strain nearly decimated the band, who went on hiatus at the beginning of 2014, but what a difference a year makes. Released alongside Blythes first foray into the publishing world, Dark Days: A Memoir, the aptly named Sturm Und Drang (German for storm and stress) picks right up sonically where 2012’s Resolution left off, with opener and lead single Still Echoes arriving via a blaze of feedback and serpentine riffage, while offering up a chilling history lesson concerning Prague’s infamous Pankrac Prison, where Blythe served his sentence. The notion of time served looms large throughout the ten-track set, with the blistering Erase This, the dirgey, cleanly crooned, Godsmack/Alice In Chains-inspired Overlord, and the crushing 512 (Blythes Pankrac cell number) leading the charge. Guest spots from head Deftone Chino Moreno, who makes a ghostly cameo on the beefy Embers, and Dillinger Escape Plan’s Greg Puciato, who lends his voice to the brooding closer Torches, make for a nice touch, but the album resonates the most when Blythe and company simply lock up and let loose, as is the case with the scalding and completely uncompromising Footprints and Anthropoid, both of which sound like the work of a band ten years younger. The notions of conflict, turmoil, and regret are certainly well-worn staples of the genre, but with Sturm und Drang Lamb of God have accrued a significant amount of experience in all three, and have distilled those concepts into pure unfiltered adrenaline.