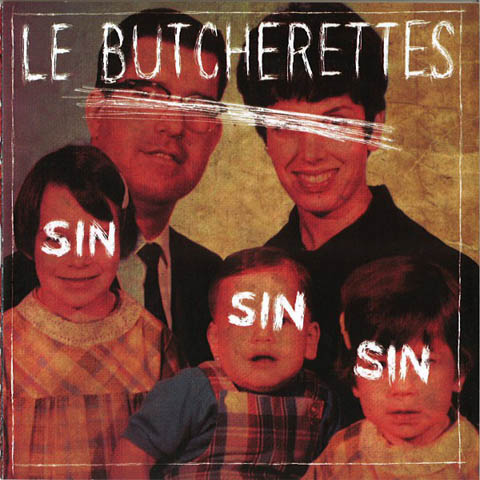 Teri Gender Bender (Teri Suarez), the frontwoman, songwriter, and guitarist of Le Butcherettes is a young, literate, angry, and funny poet. The Denver-born, Mexican-bred founder and frontwoman of this trio (which has different studio and live incarnations), has plenty to say on Sin Sin Sin, the band’s debut long-player. In these 13 songs, she raggedly stitches together strands from obvious influences (PJ Harvey, the Kills, Blood Red Shoes, and Beck, to name a few), in a manner that’s entirely un-self-conscious and emotionally raw, with zig-zagging melody, chord, and riff changes that are as accessible as they are adventurous. Sin Sin Sin is 21st century punk by way of indie rock. Suarez’s guitar and keyboard lines create riffs and splintered melodies that her rhythm section — producer Omar Rodriguez-Lopez on bass, and Normandi Heuxdaflo on drums — expertly accompany lyrics whose take on postmodern feminism, love, lust, the politics of the drug war in Mexico, race, class, and societal conventions is startlingly original. A four-note keyboard and bass vamp introduce “Tonight,” the album’s opener. Suarez simultaneously sings and shouts: “He just stares but it’s not staring/It’s sin tonight…In my mouth, in my thigh/in my rib/in my backside/In the middle of my sleep…all you wanna do is rip right through…” As Heuxdaflo rolls and skitters around her voice, guitars challenge the cheap synth for dominance. The album’s first single, “Henry Don’t Got Love,” is a messy pop-punk number whose refrain — “I’m green when you kick me/Your man thinks he’s bigger than my law/You’re ashamed of me/Do-do-do-do-do” — stands in contrast to the feminine strength in its verses where the protagonist calls out machismo for its fear and loathing. “The Leibniz Language” uses seeming non-sequitirs to elaborate a narrative of nakedly beautiful poetry addressing the political nature of gender difference and ambiguity. “Tainted in Sin,” a sparse, Suicide-esquee number, uses a quick call-and-response verse/chorus to deal with childhood and destructive guilt; it threatens to explode but never quite does; it keeps its rage in check, making it all the more sinister. Ultimately, Sin Sin Sin is an audacious debut that establishes Suarez’s place as a songwriter of true originality and power. That said, it will be no surprise if Le Butcherettes’ current hybrid of punk, indie pop and angular rock doesn’t define them for long.