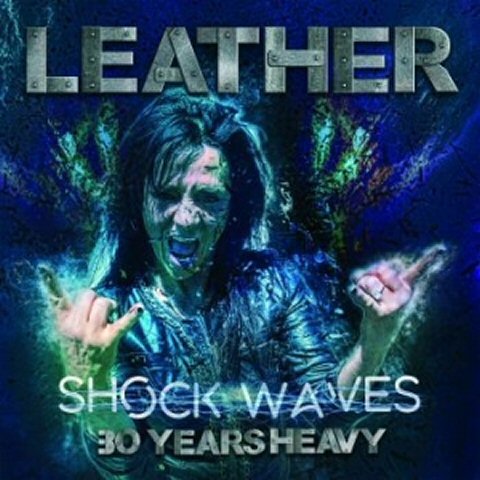 Throughout most of the 1980s, singer Leather Leone provided the distinctive and powerful female voice for Cincinnati, OH’s fiercely independent heavy metal institution Chastain, which was of course masterminded and captained by none other than self-made guitar hero David T. Chastain. Come 1989, though, the prolific duo agreed that perhaps it was time for Leone’s talents to be given a showcase of their own, and thus was born the band named Leather, and the album entitled Shock Waves. Not surprisingly, Chastain was responsible not only for helming the project’s production duties, but penning most of its songs (some together with Leone), among which the galloping “The Battlefield of Life,” the dramatically chorused “In a Dream,” and the imperially paced “Diamonds Are for Real” provided some of the most bombastic and satisfying highlights. But Leone was also partnered with sometime Nevermore and Cannibal Corpse guitarist Pat O’Brien for the album’s memorable, staccato-driven opening cut, “All Your Neon,” and the alternately pummelling and sublime “Something in This Life”; then took delivery of the also fine title track from reclusive Manilla Road legend Mark Shelton — nice! But even more than the album’s consistently high songwriting standards throughout, perhaps the single most significant thing about its tunes (even the token power ballad “It’s Still in Your Eyes”) was just how uncompromisingly heavy they were! In a decade when female fronted hard rock and metal bands almost invariably tended towards the softer, glam rock side of the commercial spectrum, this victory of creative integrity over commercial temptations may well be both Leather’s and Shock Waves’ most admirable legacy and achievement.