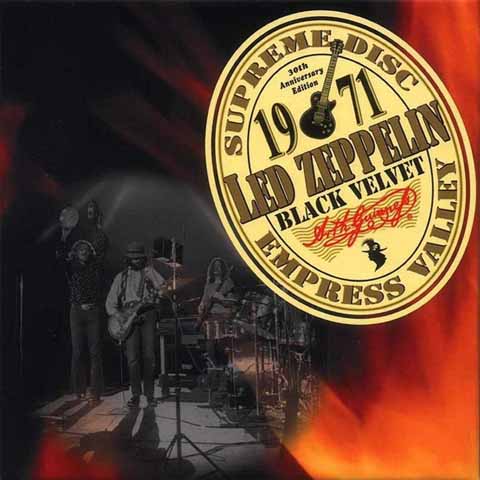 This two Irish shows from the 1971 are legendary because the band tried out songs from the upcoming Fourth Album, including the first public performance of Black Dog, Stairway To Heaven, Going To California and Rock And Roll. The first two cds features the show from Ulster Hall in Belfast on the 5th of March 1971. The recording is slightly distorted as per many of the audience recordings of the time. Make no mistake about it, what you are hearing is Led Zeppelin at the very top of their game. The band walked on stage with no warm up act and went straight into the Immigrant Song followed by Heartbreaker, complete with a compact guitar solo. I simply don’t have words to aedquately describe the impact that first fifteen minutes had on me and on those that were there. It changed things for me. I, as did everyboy stood in disbelief in the face of the pure wall of energy, raw talent and passion, images and sound are etched in my memory and still are as vibrant +40 years later. A full-on version of Black Dog complete with a mistake in the first instrumental passage was there and that was just the start it got better! It was the first time they played Stairway To Heaven live, I remember Plant saying “this is a thing off the fourth album, I hope you like it”. We did. Fans who have wondered what the first ever public performance of Stairway To Heaven must have been like and wasn tin Belfast back in 1971. Well, wonder no more for now it can be heard. Zeppelin finish the main set with a compact Whole Lotta Love medley. Rock And Roll is another preview, played at a frantic pace. This concert is a must for any Robert Plant fan. He gives the show 110% and the unbelievable power of his amazing high pitched vocals is evident right from the start. As I left the Ulster Hall around midnight I remember clearly looking up fully expecting to see cracks in the ceiling, such was the energy we all expended that night. From time to time I meet people who were there, old friends and some new ones, we nod approvingly, smile with an understanding that knows we were lucky enough to have experienced something magical and life altering. We rarely try to describe it to the “others”, those that didn’t make it, because we know we can’t do it justice.

Out next is the show from National Boxing Stadium in Dublin the following evening, 6th of March. Here is an original review of the show; The visit of a band of the stature of Led Zeppelin is rare in Dublin, so it was not surprising that last week the National Stadium, normally a venue for amateur boxing tournaments, was packed with 3,000 Irish progressive music fans. Led Zeppelin were playing the second concert of their current British tour after a three month lay-off for recording work and having played a sensational concert the night before in Belfast, came south and proceeded to whip up the Dublin fans into a cheering, stamping, throbbing mass. The standing ovation started long before the show was over, and at the end Zeppelin had to come back for several encores before they could get away. Zeppelin are the heaviest and loudest group yet heard in Dublin, and the huge banks of amplifiers and speakers pushed out a fantastic wrap-around volume. Their performance comprised of material from their previous three albums. There was a bit of confusion at the start over what they were going to play. “We had a list on a piece of toilet paper”, explained Robert Plant, “But I think it’s been used.” However, once under way Led Zeppelin cruised through the evening without much trouble. Jimmy Page played some excellent guitar throughout; including a clever piece of work with a violin bow during Dazed And Confused, and John Bonham own huge applause for his drum solo during Moby Dick. The place really erupted when Zeppelin went into Whole Lotta Love, which had been shouted for from the start of the show and many of the fans were standing on their seats waving their arms and cheering for the duration of the number. Stairway To Heaven was one of the new numbers which starts off in a relaxed way and builds up into heavy rock. Page switched to a twin-necked guitar with six and twelve strings and featured some nice finger style work in the introduction. Another new number from the upcoming fourth album was Going To California, with John Paul Jones on mandolin and Page on acoustic guitar. With Plant on vocals, which provided an ear-resting contrast to the remainder of the programme. “California” showed an influence that may come from Robin Williamson and Mike Heron, and on their next album this could well be known as Led Zeppelin’s “Incredible” string band. The last part of the concert was given over to a mixture of old and new rock with items like Suzie Q, Sugar Mama, Lemon Song, That’s Alight Mama and C’mon Everybody – all following in quick succession. It raised the excitement to fever pitch and the short-haired, grey-suited officials of the National Stadium gave up trying to make the people sit down and instead arranged themselves along the front of the stage in case of a possible riot. However, it all finished peaceably and 3,000 fans went off into the night more than satisfied with this tremendous concert.