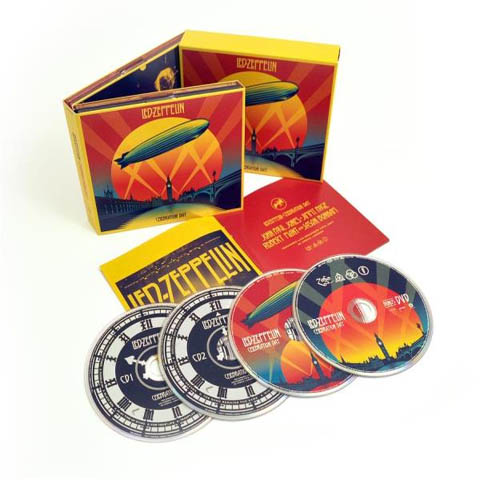 Contrary to popular perception, Led Zeppelin isn’t exactly averse to reunions. If anything, Jimmy Page and Robert Plant can’t keep away from each other. Just four years after John Bonham’s 1980 death, Page laid down guitar on Robert Plant’s oldies act the Honeydrippers, and not long after that, John Paul Jones joined the pair for a performance at 1985’s Live Aid. That set was trashed by the public and band alike, as was their subsequent 1988 appearance at Atlantic Records’ 40th Anniversary celebration, but despite these lackluster gigs, rumors of a full-fledged reunion continued to circulate well into the new millennium, even after Page & Plant recorded a pair of albums in the mid-’90s — a project that caused tension with Jones, who was unaware of the collaboration until its release. Eventually, all the bad blood cooled and the trio once again reunited, this time with Bonham’s son Jason on drums, for a full-fledged set as the headliners for the 2007 Ahmet Ertegun Tribute Concert. Five years later, this reunion was finally released as Celebration Day, a live album available either as an audio or a cd/dvd/blu-ray set, letting the world at large experience what was roundly and rightly acclaimed as a near-perfect reunion. Why is Celebration Day such a resounding success? The snide answer is rehearsal: Zeppelin knew their previous two returns to the stage weren’t up to snuff so they spent a great deal of time woodshedding, realizing their reputation was on the line. And since none of the participants were truly tempted by an ongoing reunion, one where they would have to hawk the same set list at every corner of the globe for over a year, they decided to pour all they had into this one-off concert, betting that one great gig would trump a globe-conquering tour. They were right. Celebration Day is an ideal coda for Led Zeppelin, proof that the group’s skills only deepened with age. Never once does the group sound as if they’re grasping at re-creating their youth; they’ve selected a set heavy on blues, atmosphere, and hits, songs that allow each member — including Jason Bonham — to stretch out and casually flaunt his skills. Plant may no longer be able to reach the soaring highs he did in the ’70s, but his lowered range gives “Black Dog” and “The Song Remains the Same” gravity, and helps give “Trampled Under Foot” a gut-level punch. Page still can muff a note or two — so can the band, actually, with Plant missing a line on the opening “Good Times Bad Times,” a mistake that’s thankfully left uncorrected — but his imagination is unchained, and, when compared to the Page/Plant records of the ’90s, it becomes clear how much Jones contributed to the band’s chemistry, lending it grit and funk (“Misty Mountain Hop” grooves more than any song without bass should), deepening and coloring Page’s riffs, letting the band bounce out and return to center. All of this unique chemistry is evident on Celebration Day — underscored ever so slightly by the presence of Jason Bonham, the son of the king who now seems like the only possible heir to the throne, emphasizing that the band is a family affair — and while this reunion is so unexpectedly, impossibly good that you’d want to experience this in the flesh, it also underscores the wisdom of leaving this as a one-time thing. This is so good that this is how you want to remember them: older, perhaps wiser, and still majestic.