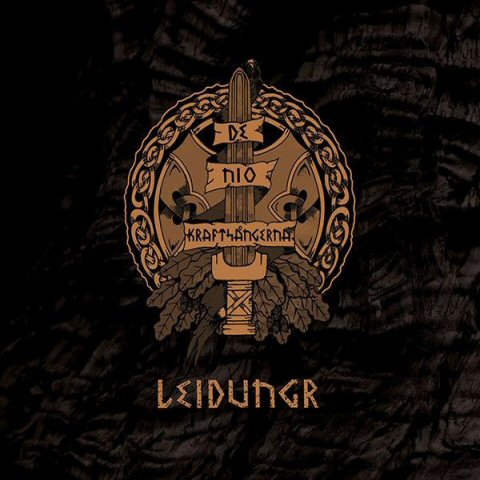 Ragnar Lothrok has been executed by the hand of England’s King Aella during the invasion of Northumbria. Battle morale has been damaged but not depleted. The time has come for prayer to the Norse gods as revenge is shortly to be had. A time of reflection gives birth to new unity. Victory arrives and a celebration is to commence. Raise your horns. This is the landscape created by Leidungr. Leidungr is the product of H. Moller (of Arditi and Puissance) and M. Belfagor (of Nefandus and Ofermod) along with P. Stahl. Nordic Ritual Folk is the self-imposed yet appropriate style created by Leidungr. De Nio Kraftsangerna presents one of those unusual cases where discussing the actual tools of the trade (i.e. instruments used in this case) is virtually pointless. Why? Because when you create sonic landscapes and evoke so much imagination like Leidungr succeeds in doing, it’s far more appropriate to imagine one’s self sitting among the clan and sharing stories. In this case, it’s more appropriate to discuss the narration that perhaps guides the men into a battle (spoken word by band members Mikka Belfagor and Peter Stahl) or maybe the repetitious patterns which are then layered into dynamic compositions possibly serving as a soundtrack to the march. Sorry, Amon Amarth. You can write lyrics but come nowhere close to resembling composers of a Nordic battle landscape. De Nio Kraftsangerna isn’t so much about the battle itself. Rather, it’s the contemplation of an uprising and revenge. It’s the soundtrack for the march. Finally, it’s the music during the celebration in light of the victory. This is Nordic ritual folk. Moreover, De Nio Kraftsangerna is the reason you should appreciate this incredible music; part ritual, part martial but always evocative and reminiscent of days long ago