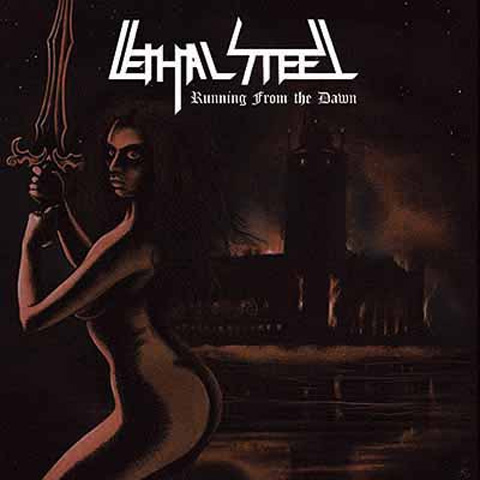 In 2012 Lethal Steel from Sweden issued their first demo and started playing some smaller venues in their home country. Guitarist Johan Frick explained a few years back: The demo was recorded at Fryshuset during a couple of weeks in May 2012. We recorded it all by ourselves. We rushed the recordings to finish the demo before Muskelrock to have something to show the people at the festival. That year we went directly from Muskelrock to Sweden Rock. Then came their debut album Legion Of The Night in 2016 followed by the Running From The Dawn mini album in 2020. I would say mostly the vocal structures are the biggest difference between Legion Of The Night and Running From The Dawn, Viktor Gustafsson says. I believe we’ve written songs more fitting for my style of singing. Otherwise the songs are pretty much built in the same way, with fast riffs and pounding drums.
Ge All” from Running From The Dawn is once again a song sung in Swedish (Lethal Steel had one on the first record as well). Not a lot of bands from the traditional first wave of Swedish metal bands in the late 1970s/early 1980s had Swedish lyrics… Viktor Gustafsson explains: Not too many, that’s correct. But quiet a few of the underground bands like Jonah Quizz, Reflex and Onyx worked with Swedish lyrics. I think this gives a vibe to the songs that is hard to reach when you sing in English.