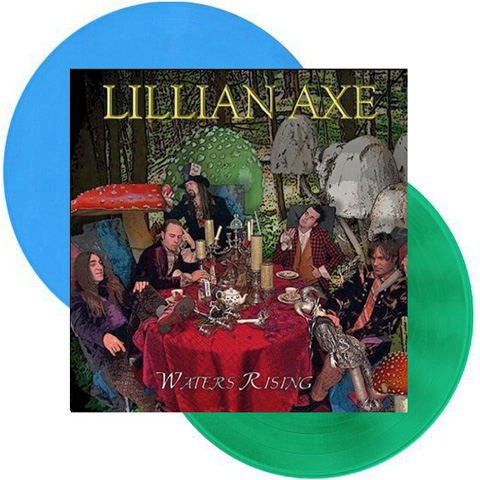 Double album with one green and one blue vinyl and lyric insert. Limited 400 numbered copies

Lillian Axe is a melodic rock quintet from Michigan Usa that released some hardrock albums during the late 80s and early 90s. The band split up after the release of 1993’s Psychoschizophrenia and guitarist Steve Blaze went on to form Near Life Experience with his brother Craig Nunemacher. That project never really took of and Steve decided to reform Lillian Axe, by name only, and put together a new line-up including new vocalist Derrick LeFevre to record Waters Rising. Here Steve tries to keep true to their vintage 80s rock while still trying to update their sound to keep pace with modern trends meaning abandoning the hair metal roots while keeping those chunky riffs and layered harmonies. 3 of the tracks have also been released before (Become A Monster and Thirst were released on the rarities album, Fields Of Yesterday, and the instrumental 5 was released on Steve Blaze solo album. Lillian Axe was only one of countless 80s-era metal heavyweights that were trying to give the old days a rebirth in the early 21st century and not many took notice of Water Rising. Lillian Axe should have picked a better time to shake off the cobwebs but they would release better albums later on.