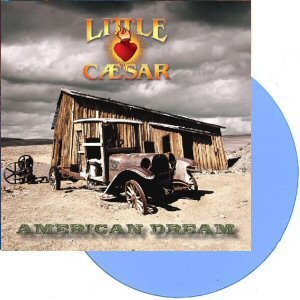 Little Caesar’s self titled debut from 1990 is today looked upon as a classic album of some kind. It was also one of the first albums produced by then engineer turned super producer Bob Rock. He then, of course went to produce quadruple platinum albums with acts such as Motley Crue, Bon Jovi and Metallica. Too bad more people didn’t find out about that album when it came out. Because that was a great album, full of hard rock born in the 70’s with both an 80’s touch and influences by old soul and rhythm & blues. Former David Bowie guitar player Earl Slick joined the band for the ill fated, but underrated Influence two years later. As that didn’t happen, the band split up and lead singer Ron Young joined force with ex-Whitesnake members Adrian Vandenberg, Rudy Sarzo and Tommy Aldridge and formed Manic Eden. That didn’t work either and after just one album that band disbanded as well. An album of demos were released as This Time It’s Different in 1998 without the band actually had reunited, but to no avail. It would take the band as long as 2009 to get an actual reunion in order. As the original line up weren’t up for it, it was more of singer Young reuniting with the name than an actual reunion as such. Not that it matters much. Little Caesar was Young’s baby from the start and he’s the most important part of the constellation. The album they released, Redemption, was good enough and the sound of Little Caesar was still present and it sold ok, which meant that the band would keep on going. But when it comes to smaller bands that never had that much success to begin with, those reunions are usually a one off. That’s why it’s nice to see that Ron Young and his band still feels that the band and the name still has some authority in the music biz and keeps hanging in there. Because this album is really good. Just like their debut, this album is full of groovy, classic rock with the same influences as they had from the start. And as a singer, Young still has the soulful raspiness in his voice that he always had. And the range is still there as well. And I can’t help but to love this. It’s not deep music by any means, but who cares! This is music to party to, to dance to and to watch in a club with a couple of cold ones inside. The kick ass Holy Roller opens the album in a classic Little Caesar style and after that the raunchy, groovy rockers keeps lining up. The title track, the fantastic Hard Rock Hell with its out of this world chorus, In My Mirror, The Girl’s Rockin, the good old time rock ‘n’ roller Is Your Crazy Gettin Lazy, the classic L.C. Drama Queen and the fantastic bluesy rocker Dirty Water. Even the ballad Only A Memory Away grooves like crazy. But then again, it is a ballad as in rock ‘n’ roll ballad. This stuff is so hot it almost makes me sweat just to write about it. There are a filler or two on here, as always, but never mind those. Because this is a great, straight up hard rock ‘n’ roll album. If you like it sleazy, if you like it dirty, if you like it mean, if you like when it just totally rocks. And of course, if you liked Little Caesar before, then this is for you. And yes, this is easily their best effort since their debut. Next time you’re having a party at home, make sure you own this one by then.