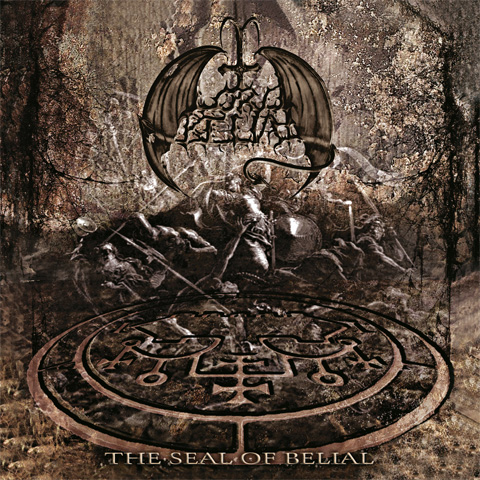 Nuance is a word that can easily be used in connection with Pink Floyd; it’s a word that is equally applicable if the artist in question is Charles Mingus, Sarah McLachlan, Radiohead, Ivan Lins, De La Soul, or Astor Piazzolla. And Metallica — as balls-to-the-wall as they can be — certainly recognize the value of nuance. But when you’re dealing with the death metal/black metal field, the word nuance usually doesn’t apply because in many cases, extreme metal is about massive sensory assault for the sake of massive sensory assault. Not nuance, not complexity — just vicious, pummeling, headcrushing savagery (which, despite its limitations, can be exhilarating if you’re one of the kids in the mosh pit). But some death metal and black metal CDs are definite exceptions to that rule, and Lord Belial’s The Seal of Belial is such a CD. For all its intensity and heaviness, this is a black metal/death metal release (more black metal than death metal) that clearly values melody, harmony, musicality, craftsmanship, and — here’s that word again — nuance. Musically, this Swedish combo offers a lot of rewarding twists and turns; Lord Belial has obviously learned a thing or two from old-school headbangers like Queensrÿche, Ronnie James Dio, Iron Maiden, and Judas Priest. But this CD is far from a power metal revival disc, and the over the top vocals (which generally favor a black metal rasp over a guttural death metal growl) clearly put The Seal of Belial in the extreme metal category. And while a lot of power metal has favored unthreatening, fantasy-based dungeons-and-dragons lyrics, Belial offerings such as “Mark of the Beast” and “Abysmal Hate” are blatantly occult-focused. The Seal of Belial is well worth obtaining if one favors the more melodic and intricate side of black metal and death metal.