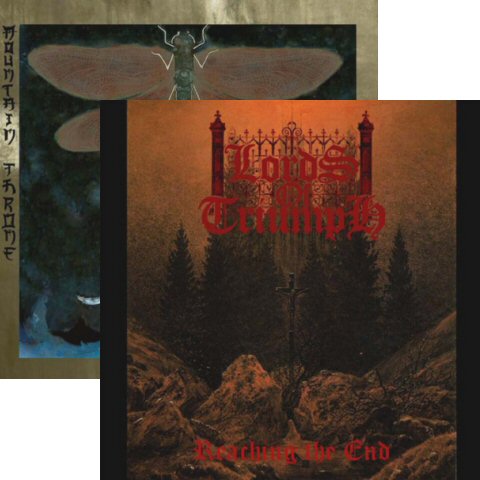 Lords Of Triumph
In the winter of 2010, guitarist Martin Meyer Mendelssohn Sparvath (Altar Of Oblivion) began work on a new project and approached Phil Swanson (Seamount, Vestal Claret, ex-Hour Of 13) to take part. They discussed ideas and concepts and it was decided to work this band in a different way than their other bands to avoid repetition or comparison. So rather than Phil take on as lyricist, it was decided that Martin would write the words based on Phil’s phonetic vocal arrangements in order for the vocals to retain the integrity to Phil’s style but perhaps allow him to be heard in a slightly different and new light. Within weeks, they had all the music and lyrics written and recorded to a rough demo and began pre-production on a full length bringing on board a full band of notable Danish musicians to fill in on bass and drums as Martin tagged this new band as “Lords Of Triumph”. Overall, this EP is a magnificent sign of things to come (hopefully) but simultaneously stands up as much more than a simple appetiser. One would be a fool to overlook this in favour of waiting for a full length album. Lords Of Triumph not only tap in to an ancient vein of doomed heavy metal, they’re also dabbling with 1970’s mystical proto-heavy metal sounds, especially with the inclusion of Lars Strem’s not insignificant keyboard work, which in partnership with the bass playing of C. Nørgaard of Victimizer, Altar Of Oblivion, Church Bizarre and Cerekloth infamy, gives the EP a fullness I heartily appreciate. To complete the package, Lords Of Triumph have used Caspar David Friedrich’s painting Wanderer Above The Sea Of Fog (circa 1818) for the cover art, which is definitely a match for the sounds contained herein. I can’t recommend Reaching the End enough. Keep on battling, Lords Of Triumph.

Mountain Throne
Mountain Throne is a rather unknown German band that has been surveying the ancient mystic, and sometimes flinty, arts of British Metal, meaning traditional Doom shrouded in greyish NWOBHM. Scouring through five songs, it is a must to make a note that nothing from this band comes out flashy and melodic (other than sprites of soloing as paved in the old days), but a mouthful of haziness, fuzzy sounding guitar amplifying simplistic riffs, grimness at times, surging around the Stoner vibe, often being energetic with cruises of speed but not over giving free rein to it and a vocal line chanting over the top with the same flamboyance that drove the older fans mad with appreciation when they listened to the steely voice presentations Black Sabbath or Pentagram, but here with a gutsy spike as a reflective supplement. What can be considered as a renowned relic of a past period, an essential tack of an honest metal work, this split is one of the many form of how metal music should sound like, yet nothing ultimate. Mountain Throne is a distinct reminder of why metal music is so influential and holding. You won’t be able to shake that one loose.